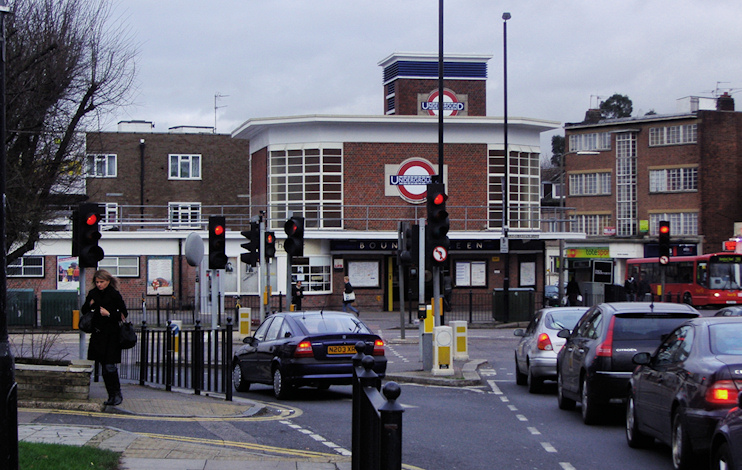 The name was first recorded as Le Boundes and may derive from a family that lived here in the 13th century. Bounds Green remained a small farming hamlet until the late 19th century, with a few cottages, a tavern and a brickworks.

Suburban houses began to appear with the outward spread of Wood Green, and Bounds Green infants’ and junior schools were built in 1895. Electric tram services began in 1906 and many Edwardian prop­er­ties survive from the conse­quent phase of housebuilding.

The suburban build-up was completed following the opening of Bounds Green station on the London Electric Railway (now the Piccadilly line) in 1932. Like others on this stretch of line, the station was designed by Charles Holden but its appear­ance is more angular than most.

In October 1940 a Luftwaffe bomb killed 17 people who were shel­tering in the tunnel at Bounds Green station, and four others who were at home nearby.

Factories were estab­lished in Bounds Gren in the years before and after the Second World War, at first indi­vid­u­ally and later on an indus­trial estate. In the late 1970s an old warehouse was converted for use by Middlesex Poly­technic (now Univer­sity). The building has since been converted again, into resi­den­tial apart­ments. Elsewhere in the locality former indus­trial premises have been replaced by housing.

Since the early 1980s Bounds Green has attracted an growing number of Greek, Turkish and Asian residents, relo­cating from longer estab­lished commu­ni­ties a mile or two to the south-east. Around half the pupils at what is now Bounds Green school & chil­dren’s centre have English as a second language. Among the school’s many ethnic minori­ties, the most distinc­tive is a Congolese contingent.

Jerome K Jerome, the author of Three Men in a Boat, probably had his first experience of boating on a waterlogged brickfield in Bounds Green.

* The picture of Bounds Green Tube station on this page is adapted from an original photograph, copyright David Howard, at Geograph Britain and Ireland, made available under the Attribution-ShareAlike 2.0 Generic Licence. Any subsequent reuse is freely permitted under the terms of that licence.