A socially advantaged settlement situated on the southern side of Enfield 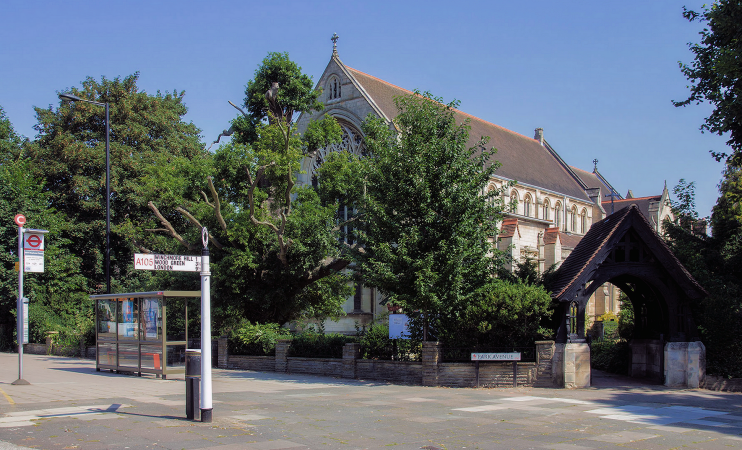 The small estate of Bush Hill Park orig­i­nated in 1671 and a “commodious brick mansion” of that name was in existence by 1724. This was also known as the Clock House, from a clock tower that was removed in 1875. The Bush Hill Park Company began to build suburban houses on the estate in 1877.

Prompted by the growth of the area (and stim­u­lating more) the Great Eastern Railway opened a station on the previ­ously existing branch line to Enfield Town in 1880. Bush Hill Park Golf Club was founded in 1896 and orig­i­nally occupied the site now covered by the lovely Queen Anne’s Gardens. When that land was sold for housing in 1911 the club moved to its present home on Enfield’s Old Park estate.

Devel­op­ment in Bush Hill Park took different forms on either side of the railway line. To the west were wide, tree-lined roads with well-propor­tioned houses and large gardens. Much of this side is now desig­nated a conser­va­tion area, shaped remark­ably like a map of Great Britain and Northern Ireland.

Across the tracks the Cardigan estate was laid out from 1889 with terraced houses intended for the working classes.

The eastern portion of Bush Hill Park was entirely built up by the outbreak of the First World War. The western part continued to fill up after the war and Bush Hill Park House remained as a private residence, though with much smaller grounds, until it was pulled down in 1929.

After the Second World War many of the best houses from the first phase of Bush Hill Park’s devel­op­ment were demol­ished and replaced by privately built blocks of flats.

In 1974 Enfield council compul­so­rily purchased prop­er­ties north of Main Avenue and demol­ished Fifth, Sixth, and Seventh Avenues to put up a housing estate. Extensive Roman remains were discov­ered in the process and the new cul-de-sacs were given Roman-related names.

The Bush Hill Park ward has the highest propor­tion of owner-occupied housing and of married couples with children in the borough. Employ­ment levels are high and crime is low.

In 1975 two IRA gunmen shot dead the writer and broadcaster Ross McWhirter on the doorstep of his home in Village Road. McWhirter had publicly campaigned against the IRA and had offered a reward for information leading to the arrest of anyone involved in its London terror campaign.

* The picture entitled Finger post, bus stop and church at the top of this article is adapted from an original photograph, copyright David P Howard, at Geograph Britain and Ireland, made available under the Attribution-ShareAlike 2.0 Generic licence. Any subsequent reuse of this image is hereby freely permitted under the terms of that licence.