World famous in the 1960s, Carnaby Street is a pedestrianised shopping street running parallel with the middle part of Regent Street 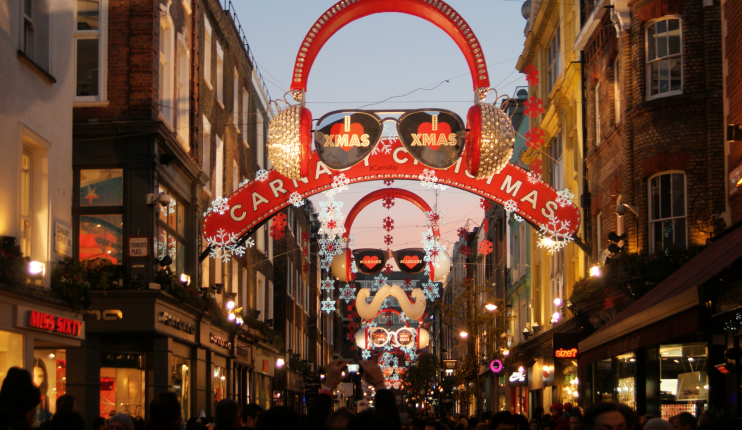 The field here belonged to the abbot and convent of Abingdon until its surrender to the Crown in 1536. In 1590 Thomas Poultney acquired the lease and the land remained in his family’s hands for the next century. There was a windmill and an adjoining well somewhere in the field, perhaps on the site of Kingly Court in the early 17th century.

Carnaby Street was laid out in the 1680s and the first property known to have stood here was Karnaby House, built by brick­layer Richard Tyler. The house may have been named after the village of Carnaby in Yorkshire. A little colony of Huguenots formed the most conspic­uous element among the street’s early inhab­i­tants, most of whom were poor.

Tyler and his asso­ciates seem to have built to extremely low standards and all the original houses in Carnaby Street were rebuilt in the 1720s. Numbers 22, 23 and 40 survive from this phase, though they have since been refronted.

At the west corner of Foubert’s Place and Great Marl­bor­ough Street, the Shake­speare’s Head public house was probably estab­lished in 1735, allegedly by distant relatives of the Bard. It was completely rebuilt around two centuries later (a fact not mentioned on the pub’s website).

Carnaby Street and Newburgh Street were rede­vel­oped c.1820 and more than a dozen houses in the vicinity of Lowndes Court and Marl­bor­ough Court survive from this period. However, they have all been signif­i­cantly altered, mainly during their subse­quent conver­sion to shops and in some cases during repairs to wartime bomb damage.

By the mid-19th century most of the street was given over to trades of various kinds. A number of the premises were subse­quently converted to sweat­shops working for the gentlemen’s outfit­ters in nearby Savile Row.

In the 1950s some of these tailors began to produce more distinc­tive garments for direct sale, including suits for the smartly dressed Mods of the early 1960s. Off-the-peg fashion retailers soon joined the party and within a few years Carnaby Street and its immediate neigh­bours had become world famous for their trendy unisex boutiques. At the height of ‘swinging London’ only Chelsea’s King’s Road offered serious competition.

Slow decline set in at the end of the 1960s, with periodic attempts to reverse it. West­min­ster council garishly refur­bished the street in 1973 and during the 1990s local traders attempted to repo­si­tion the area as West Soho, with very limited success.

The street took a turn for the better at the beginning of the new millen­nium, offering an increas­ingly eclectic selection of clothes and acces­sories amid a dwindling propor­tion of gimmicky tat.

Having helped revive Carnaby Street’s cred­i­bility, several inde­pen­dent stores were then elbowed into the adjacent courts and side­streets by major fashion retailers.

The local­i­ty’s principal landowner Shaftes­bury plc has now branded the area ‘Carnaby’, within which the ‘trend-setting’ eastern part has been promoted as the ‘Newburgh Quarter’.

Shaftes­bury recently embarked on a strategy to attract more flagship shops to the locality, leading to the arrival of trendy names like True Religion, Scalpers and Urban Decay on Carnaby Street, Tradi­tional Weath­er­wear on Newburgh Street and ‘heritage footwear’ makers GH Bass at 35 Beak Street. Eyewear brand Ray-Ban opened a store at 23 Carnaby Street in 2018.

In addition to its plethora of fashion stores and ‘concept shops’, the Carnaby zone also boasts around 60 restau­rants, cafés and bars.

“Everywhere the Carnabetian army marches on,” declared Ray Davies in the Kinks’ 1966 hit, ‘Dedicated Follower of Fashion’, but by 1977 the place was “not what it used to be” according to the Jam’s punky B‑side, ‘Carnaby Street’.

* The view back down Carnaby Street (Christmas 2014) at the top of this page is adapted from an original photograph, copyright Robert Lamb, at Geograph Britain and Ireland, made available under the Attribution-ShareAlike 2.0 Generic Licence. Any subsequent reuse is hereby freely permitted under the terms of that licence.