A street famed for its bookshops, though their number is now much reduced, running north from Trafalgar Square to St Giles Circus 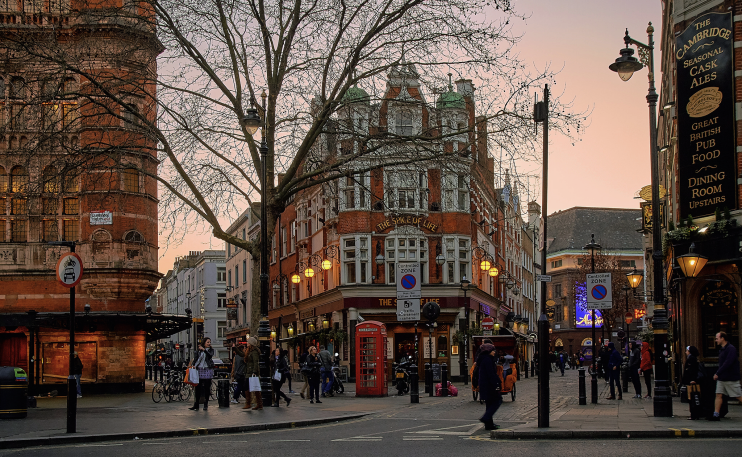 Crown Street and Castle Street formerly followed this route and their improve­ment was primarily a slum clearance and road-widening project, replacing St Martin’s Lane as the area’s principal north­bound thoroughfare.

Despite sugges­tions that the new street should be named Alexandra Avenue or Nelson Avenue, it was opened in 1887 as Charing Cross Road, a choice appar­ently preferred by the local inhab­i­tants. The Duke of Cambridge performed the opening ceremony and the midpoint junction with Shaftes­bury Avenue was named Cambridge Circus in his honour. Part of the west side of Cambridge Circus is shown in the photo­graph above.*

Leicester Square station was built in 1906. Its Cranbourn Street entrance replaced three houses belonging to Lord Salisbury, which had to be compul­so­rily purchased from the reluctant peer. Also in 1906, William and Gilbert Foyle relocated the bookshop they had founded three years earlier to Charing Cross Road.

Even before the road’s creation book­sellers had operated in the southern part of the area and the arrival of Foyles encour­aged the trade to spread along its full length. Foyles moved a short distance south in 2014, into the former home of St Martin’s school of art.

Elswehere along the street, rent rises and the general diffi­cul­ties facing bricks-and-mortar book­sellers have forced some shops to close down but several remain, including a large branch of Black­well’s and a notable cluster of special­ists in the section between Litch­field Street and Great Newport Street.

84, Charing Cross Road is the story of the American writer Helene Hanff’s 20-year correspondence with Frank Doel, of the antiquarian booksellers Marks and Co., at that address, which is now the site of a bar. The book has been adapted for the stage and screen.

The revered 1930s crooner Al Bowlly is commemorated with a blue plaque above the entrance to Charing Cross Mansions, where he lived in a flat overlooking Cecil Court.

* The picture of Cambridge Circus at the top of this page is slightly modified from an original photograph, copyright Pedro Szekely, at Flickr, made available under the Attribution-ShareAlike 2.0 Generic Licence. Any subsequent reuse is hereby freely permitted under the terms of that licence.