An anomalous enclave occupying a peninsula of the London Borough of Sutton, isolated from the rest of the borough by fields and golf courses but joined up with Coulsdon, further to the south-east 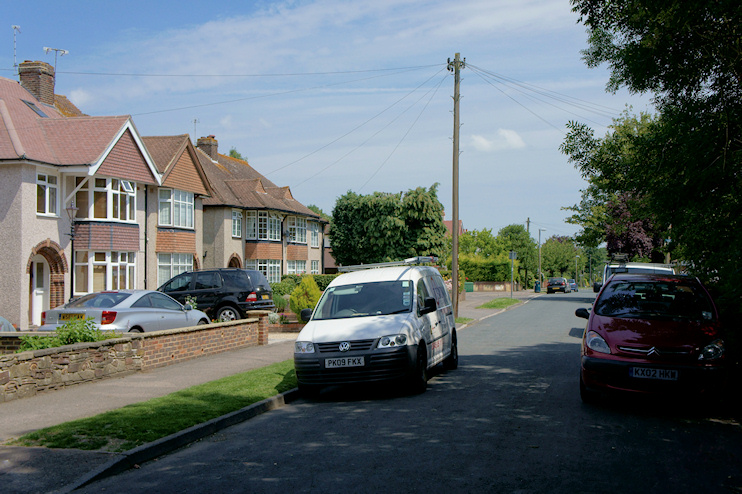 This was formerly the open land of Clock­house (or Clock House) Farm, which was asso­ci­ated with the village of Wood­mansterne and had eight cottages in the 19th century.

Devel­opers put up semi-detached houses here following the opening of Wood­mansterne station in 1932 and Carshalton council built the Clock­house estate before and after the Second World War, with local shops at Hillcrest Parade on the Mount. Locals often refer to the Clock­house area as ‘the Mount’, after this central road, which is shown in the photo above.* Privately-built detached houses and council flats and maisonettes later extended the diversity.

The clock-topped farmhouse that gave the estate its name lay across the Surrey border in Banstead and was demol­ished in the 1970s to make way for more houses. Among the most recent additions are housing asso­ci­a­tion prop­er­ties next to the Methodist church on Whitethorn Avenue. Since a boundary change in 1993 Sutton council has operated the sport and recre­ation facil­i­ties at Corrigan Avenue.

Located at the eastern end of Longlands Avenue, the almost rural Jack & Jill pub closed without notice in May 2018. At the time of writing it is not known whether it will reopen.

The only direct way to reach Sutton town centre is to walk (or of course ride a horse) along bridlepaths. Most young residents of Clock­house are educated within the borough of Croydon, but local voters have over­whelm­ingly rejected the oppor­tu­nity to secede from Sutton.

Clock­house formerly had the lowest popu­la­tion of any ward in all the London boroughs but has since been amal­ga­mated with parts of Carshalton.

A 2004 attempt to use census data to measure happiness found that the ward of Carshalton South and Clockhouse was the second ‘happiest place to live’ in London.

* The picture of The Mount at the top of this page is slightly modified from an original photograph, copyright Peter Trimming, at Geograph Britain and Ireland, made available under the Attribution-ShareAlike 2.0 Generic Licence.Any subsequent reuse of either image is freely permitted under the terms of that licence.