An interwar middle-class suburb with a strongly Jewish character, situated three miles north-west of Hendon and split between two boroughs along the course of the former Watling Street 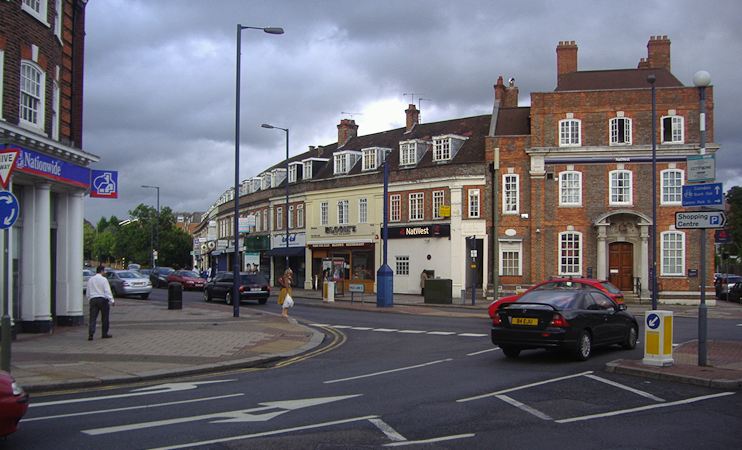 Edgware’s name meant ‘Ecgi’s weir’ and was first recorded in an Anglo-Saxon charter of around 975 but was omitted from Domesday Book. Ecgi probably constructed his weir on what is now the Edgware Brook either to trap fish or to irrigate his field.

It is said that medieval pilgrims trav­el­ling from London to St Albans would stop at Edgware to rest and to pray at St Margaret’s Church, which was in existence by 1375. The church was rebuilt in 1764, when Edgware was becoming an important coaching halt, and a starting point for some services to London. Several inns were estab­lished and Edgware held fairs in the 18th and 19th centuries.

The Great Northern Railway Company opened its branch line to Edgware via Mill Hill in 1867 and was soon making a profit but the indirect route discour­aged potential commuters. As the coaching trade declined, wheel­wrights and black­smiths departed and the village became primarily agricultural.

Only a few streets of terraced houses had been built by the outbreak of the First World War. Services on what is now the Northern line began in 1924, when the builders were already hard at work laying out new streets for the middle classes either side of Dean’s Brook. To the south, the London County Council built Burnt Oak’s expansive Watling estate.

The comple­tion of the Edgware Way bypass in 1927 brought a sea of detached houses to its hinter­land but progres­sive northward expansion was halted by the outbreak of the Second World War, and subse­quently restricted by green-belt regulation.

Some ancient buildings survive on the west side of the High Street, including the 17th-century White Hart Hotel (as it was formerly called), but many more have been lost through road widening. Station Road and the Broadwalk Centre are the main places to shop.

As well as its very large Jewish popu­la­tion, Edgware has signif­i­cant Hindu and Muslim minori­ties, mainly of Indian origin.

Agatha Christie created the characters Lord and Lady Edgware (and the Duke of Merton) in a 1933 Hercule Poirot classic.

* The picture of the Edgwarebury Lane junction with Station Road, Edgware at the top of this page is adapted from an original photograph, copyright David Howard, made available under the Attribution-ShareAlike 2.0 Generic Licence. Any subsequent reuse is hereby freely permitted under the terms of that licence.