An extensive and diverse district centred on Enfield Town and encompassing a broad belt of localities such as Southbury, World’s End, Grange Park, Gordon Hill and Bullsmoor 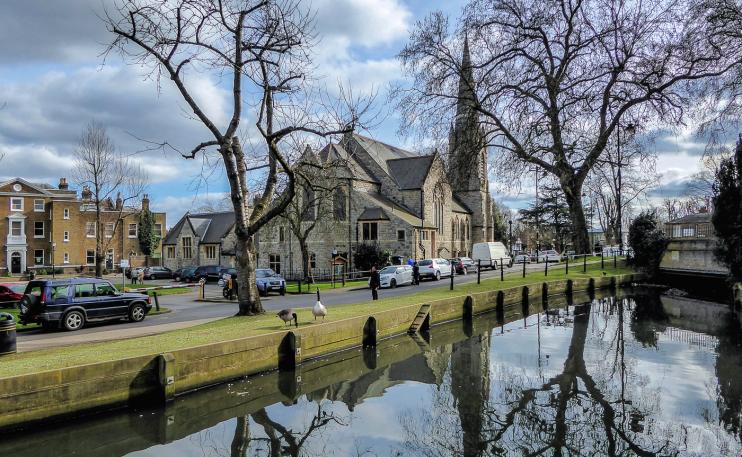 A settle­ment grew up around Enfield Green and St Andrew’s church in the Middle Ages. The wooded expanse of Enfield Chase lay to the west, where haymaking and dairy farming became the predom­i­nant forms of agri­cul­ture after its enclosure and deforestation.

Most of the land to the east – down to the River Lea – was occupied by arable fields, many of which were later converted to market gardens. The protected status of the chase and the inhos­pitable nature of marshland by the Lea discour­aged the early growth of outlying hamlets but the town itself flourished.

Enfield grammar school dates from 1557 and the New River was cut through the parish in 1613; its course has since been altered. By the mid-17th century the vicinity of the green was known as Enfield Town and villages were evolving at Clay Hill and along the Hertford Road, notably at Ponders End. Numerous fine houses were built or rebuilt during the 18th century in the town and the surrounding country. Gentleman’s Row (the south end of which is visible in the photo­graph above*) and Forty Hall are among the best survivors.

The manu­fac­ture of muskets at Enfield Lock from 1804 was an indicator of the district’s early indus­trial potential and marked the birth of Enfield’s important place in the history of gunmaking. In 1831 Enfield was the second most extensive parish in Middlesex, covering some 20 square miles.

As the railway companies thrust four fingers of lines into the district from the mid-19th century, the discrete villages began to grow together, coalescing in the early 20th century.

Factories were concen­trated in the east, along the banks of the Lea, with accom­pa­nying housing for their workers. West of the Great Cambridge Road, constructed in 1924, devel­opers built mostly for the middle classes.

The indus­trial side of Enfield inevitably suffered most from bombing in the Second World War, and became the focus of the larger municipal housing projects in the 1960s and 1970s. ‘Sunset’ indus­tries have closed down or moved away from the Lea Valley corridor in places such as Brimsdown, sometimes to be replaced by wholesale or retail ware­houses but in other cases leaving empty brown­field sites in need of regeneration.

To the north and west of the town centre the green-belt status of open land has preserved the pre-war street plan and enhanced property values.

In recent years Enfield has begun to present a more cosmopolitan aspect than many other districts on the fringes of Greater London, and is attracting unmarried young profes­sionals as well as families, although the absence of a London Under­ground line is a deterrent for some. The most important modern projects have been the rede­vel­op­ment of the Royal Small Arms Factory site as Enfield Island Village and recent changes in the town centre.

Former Enfield residents include civil engineer Sir Joseph Bazalgette and Isaac D’Israeli, father of prime minister and novelist Benjamin Disraeli and a literary talent in his own right.

The mythical beast of Enfield

The enfield is a mytho­log­ical creature that has been claimed to represent a fusion of the animals that once frequented Enfield Chase – though in fact there is no proof of any connec­tion between this place and the beast’s invention.

Enfields are said to have protected the bodies of chief­tains who had fallen in battle so that they could after­wards be accorded a cere­mo­nial burial, and in this context are primarily asso­ci­ated with the Kelly and O’Kelly families of Ireland.

Depic­tions vary but the beast is usually shown with the head of a fox, the chest of a hound (or, rarely, an elephant), the breast feathers and foreclaws of an eagle, the abdomen of a lion (or wolf) and the hindquar­ters and tail of a wolf. A horse’s mane has also featured in some representations.

An enfield appears on the coat of arms of the London Borough of Enfield (as shown in the image) and on the crests and badges of several clubs and insti­tu­tions in the borough.

The picture of the New River Loop, Gentleman’s Row, Enfield at the top of this page is adapted from an original photograph, copyright Christine Matthews, at Geograph Britain and Ireland, made available under the Attribution-ShareAlike 2.0 Generic Licence. Any subsequent reuse is hereby freely permitted under the terms of that licence.