The smallest of the central London royal parks, situated east of Hyde Park Corner, in the crook of Piccadilly and Constitution Hill 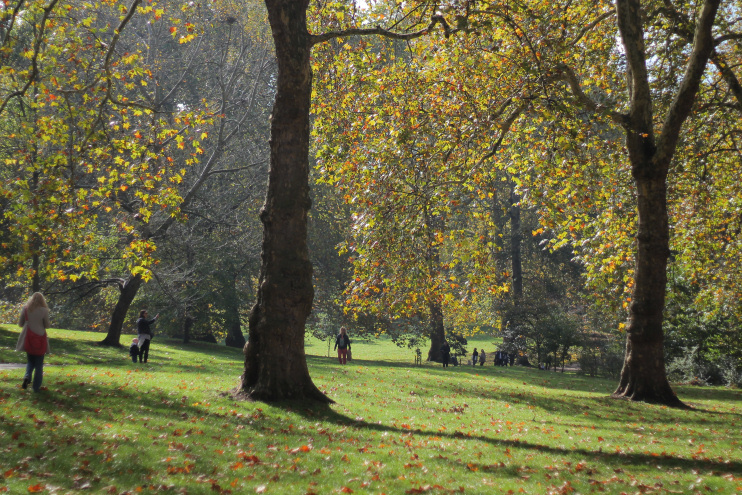 The park’s existence was first recorded in 1554 when Sir Thomas Wyatt led a rebellion against the marriage of Mary I to Philip II of Spain. Duels were later fought here.

Charles II enclosed the park with a brick wall in 1667, stocked it with deer and provided a ranger’s house. Consti­tu­tion Hill is so called because Charles took his consti­tu­tional walks here. The park was known at that time as Upper St James’s Park but was commonly called Green Park (or The Green Park) by the mid-18th century.

Green Park has always been plainer than its more illus­trious St James’s neighbour, although little ‘temples’ were built to mark the end of the Austrian War of Succes­sion and the first 100 years of the Hanoverian dynasty. Both were quickly destroyed in firework displays.

The grass was kept verdant by the Tyburn River, which ran below the surface and later fed the Queen’s Basin, a reservoir named for Caroline, queen consort of George II. Caroline also endowed the park with a library and a new boulevard, Queen’s Walk, which briefly attracted fash­ion­able society away from St James’s Park.

When George III acquired Buck­ingham House the part of the park south of Consti­tu­tion Hill was taken as the royal garden. The park was further reduced in size by the construc­tion of three mansions on the east side of Queen’s Walk.

Green Park was offi­cially opened to the public in 1826 and the (often mud-filled) reservoir was filled in. The Ranger’s Lodge and Queen’s Library were demol­ished by 1855. Twentieth-century modi­fi­ca­tions included the planting of hedgerows and some further attrition of the park’s borders through road widening.

Green Park station opened as Dover Street in 1906 and gained its present name in 1933. The Victoria and Jubilee lines came here in 1969 and 1979 respectively.

Claude Monet’s painting of Green Park (1871) hangs in the Philadelphia Museum of Art. It’s rather dull – but that’s London light for you, especially before the Clean Air Act.