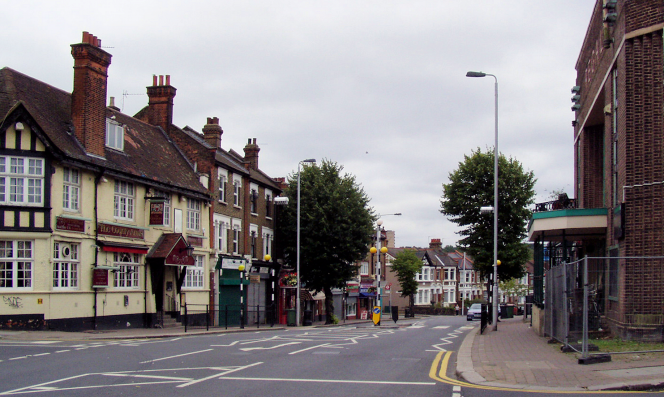 There was a Walter de la Hale living here in 1285 and a Thomas Hale in 1634. However, either could have taken their name from the place rather than vice versa, as a ‘hale’ meant a nook. An ‘end’ was an outlying place, and this was one of several ‘ends’ around Walthamstow.

There had been a clearing in the forest here since the time of Domesday Book and it was known as North End or Wood End until the present name estab­lished itself in the second half of the 17th century.

Hale End was built up after the opening in 1873 of what is now Highams Park station, which was orig­i­nally called Hale End. Tottenham and Forest Gate Railway trains also began to serve the station in 1894, when it was renamed Highams Park and Hale End to publicise devel­op­ments in the grounds of Highams, and this has resulted in a blurring of the iden­ti­ties of the two places.

With its improved commu­ni­ca­tions, Hale End gained an indus­trial base, with an emphasis on what were then ‘high-tech’ products. British Xylonite bought the 50-acre Jack’s Farm in 1897 and began to make plastics here, later pioneering the manu­fac­ture of celluloid in this country. The company’s Halex-branded goods came to dominate markets as diverse as tooth­brushes and table tennis balls. Other Hale End firms specialised in elec­tronic and scien­tific products.

After the First World War Waltham­stow council built the Hale estate, while industry was boosted by the arrival of the North Circular Road in the late 1920s and continued to flourish into the early 1960s.

Marked with a big pink pin on the map below, Hale End library is the only civic amenity in the neigh­bour­hood. Waltham Forest council has – so far – been persuaded by a well-organised residents’ campaign not to relocate and/or downsize the library or sell its pleasing building.

In 1909 two Latvian anarchists who had stolen wages from a factory in Tottenham were cornered in Hale End after a chase involving murders and tram and van hijackings. Both men shot themselves rather than surrender, one by the railway embankment beside Winchester Road and the other in a cottage on Oak Hill.

* The photo of Hale End Road on this page is adapted from an original photograph, copyright Richard Dunn, at Geograph Britain and Ireland, made available under the Attribution-ShareAlike 2.0 Generic Licence. Any subsequent reuse is hereby freely permitted under the terms of that licence.