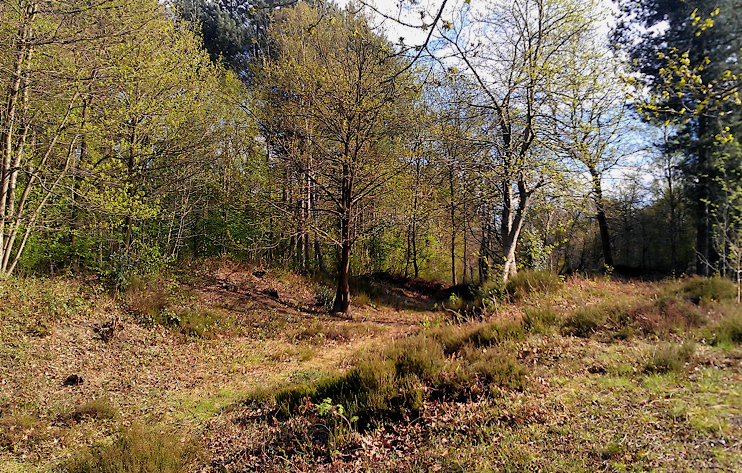 The western part of Joyden’s Wood falls within the London Borough of Bexley (with access from Vicarage Road, Old Bexley). The rest, including almost all the resi­den­tial locality called Joydens Wood, is in Kent. The map below shows the London/Kent border as a dotted and dashed lilac line.

The name derives from the family of William Jordayne, a 16th-century resident of Dartford. The wood has also been known as Jordans in the past.

The Forestry Commis­sion acquired Joyden’s Wood in 1956 and later placed it under the manage­ment of the Woodland Trust, which opened it to the public in 1988. There are over eight miles of public and permis­sive paths and three miles of bridleways.

The trust has been felling conifer trees planted during the 1950s and replacing them with native deciduous species like oak, beech, silver birch and sweet chestnut. With more sunlight reaching the ground, bluebells, lily-of-the-valley, honey­suckle and wood sage are flour­ishing. A patch of open heathland in the centre of the wood is a popular picnic spot.

Visible in the photo­graph above,* a mile-long Saxon earthwork known as Faesten Dic (Strong Dyke) runs north–south through the wood. Other ancient features include the remains of two Iron Age roundhouses.

Two Hawker Hurricane fighter planes were shot down over Joyden’s Wood in 1940. Metal fragments from one of the planes are still in the woods. Both pilots successfully bailed out before their planes crashed close by. The tail and fuselage of a Hawker Hurricane have been installed in the wood to commemorate these events.

* The picture of Faestendic, Joyden’s Wood, at the top of this page is adapted from an original photograph, copyright Ethan Doyle White, at Wikimedia Commons, made available under the Creative Commons Attribution-ShareAlike 4.0 License. Any subsequent reuse is freely permitted under the terms of that licence.