A neo-classical mansion and its landscaped estate located to the north-east of Hampstead Heath, south of Hampstead Lane 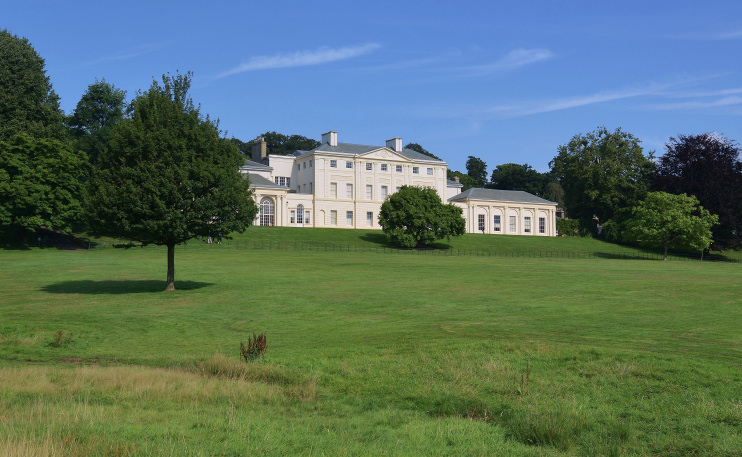 Kenwood House began its existence in the early 17th century as the home of John Bill, the King’s Printer. Near the end of that century it was acquired and almost entirely demol­ished and rebuilt by William Brydges, Surveyor General of the Ordnance. In 1764 the house was remod­elled to its present appear­ance by Robert Adam for William Murray, first Earl of Mansfield and a highly influ­en­tial Lord Chief Justice.

A plaque marks the achieve­ment of Sir Arthur Crosfield, who led a successful campaign after the First World War to save the Kenwood estate from housing devel­op­ment. The house itself was acquired from the Mansfield family by Edward Cecil Guinness, first Earl of Iveagh, who in 1927 bequeathed to the nation a collec­tion of old master paintings, including a Rembrandt self-portrait, one of only five Vermeers in Britain, Gainsborough’s portrait of Countess Howe and works by Reynolds and Turner. The paintings are displayed at Kenwood.

Kenwood House and its grounds now belong to English Heritage. The park boasts a lake, a fine collec­tion of trees and some of the most beautiful rhodo­den­dron gardens in London. There’s a kitchen garden too.

Kenwood House reopened to the public in 2013 after restora­tion works that included repairing the West­mor­land slate roof, redec­o­rating the exterior and interior of the house based on new paint research on the original Adam scheme, and a redisplay of the Iveagh Bequest paintings in the south front rooms.

Lakeside concerts, tradi­tion­ally of classical music, used to be held at Kenwood in the summer. However, noise complaints from some local residents and (primarily) the concerts’ increasing inability to turn a profit resulted in their discon­tin­u­a­tion in 2013. The concerts returned in 2018 across two weekends in June.

The house has frequently served as a film location, including for scenes in 101 Dalmatians, Mansfield Park and Notting Hill.

The photograph of the Kenwood House at the top of this page was taken by Barry Marsh, posted at Flickr, and generously released into the public domain.