A hamlet surrounded by farms and common land, situated between Keston and Biggin Hill 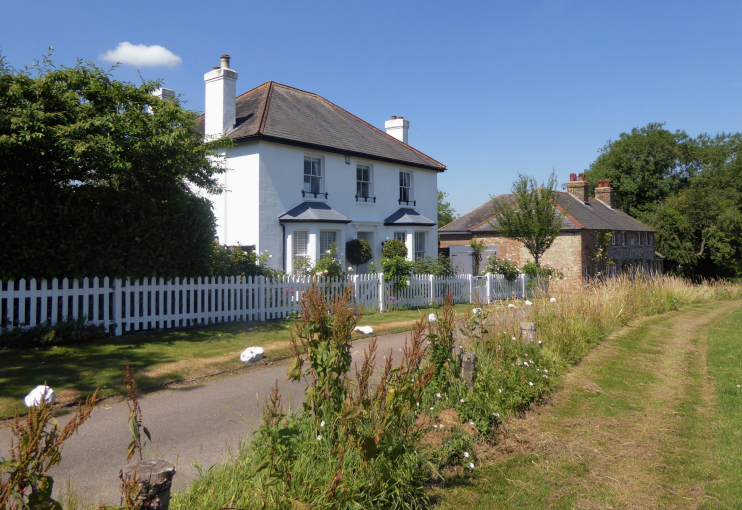 Leaves Green’s name is a corrup­tion of Leigh’s Green, which derived from a family that owned land here in the mid-15th century.

On Milking Lane, Green Leaves Cottage and Old Farm Cottage are of 17th-century origin. The equally ancient Old Cottage is set well back from Leaves Green Crescent. However, that building has been refronted.

The weath­er­boarded Kings Arms pub dates from around 1700. The ground floor has exten­sions and a porch that were added in the 19th century. A Spitfire crash-landed here in 1949 and demol­ished part of the pub.

A terrace of flint-faced cottages (now called Jasmine Cottage, Ramblers Rest Cottage and Green View) began life as Cudham workhouse, which was erected in 1731 but never much used. Situated on the east side of the green, the cottages are grade II listed.

A cast iron coal post was erected on the green in 1861 to mark the point at which duty had to be paid on coal and wine being brought into the City of London. The post is now a grade II listed structure, as is the K6 telephone box outside the Kings Arms.

Apart from those mentioned above, the most histor­i­cally signif­i­cant buildings in Leaves Green are the grade II listed Elm Cottage, Little Stone House and Old House Farmhouse, and the locally listed Summer Hill and Farringdon Cottages (shown in the photo above*) and Crown Inn. Several other attrac­tive old buildings survive in the village centre.

On the south side of the village the Leaves Green estate (450 acres of farmland) was sold in the early 1930s in antic­i­pa­tion of signif­i­cant house­building here. However, little actually mate­ri­alised because the war inter­vened, Biggin Hill aerodrome expanded, and then the green belt was created after the war.

Subse­quently there was some unap­pealing post-war devel­op­ment along Leaves Green Road, some of it highly priced. The Greenacres riding school dominates the western side of the village. Biggin Hill airport’s runway protrudes into the farmland to the east.

* The picture of Summer Hill and Farringdon Cottages, houses on the edge of Leaves Green at the top of this page is adapted from an original photograph, copyright Marathon, at Geograph Britain and Ireland, made available under the Attribution-ShareAlike 2.0 Generic Licence. Any subsequent reuse is freely permitted under the terms of that licence.