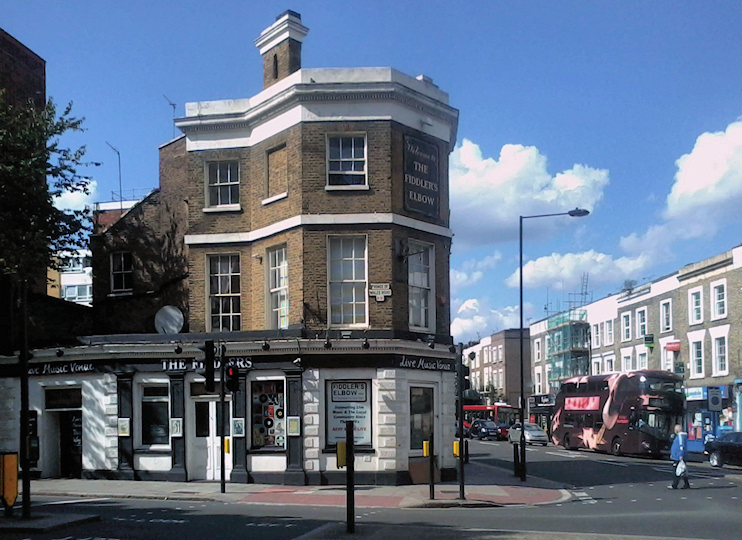 Maitland Park is named after Ebenezer Maitland, who was president of an orphanage that moved to Haver­stock Hill (as most of this area was then known) in 1847. The orphanage was surrounded by open fields to its east at that time, when local landlords the Southampton family published a plan for building homes for the wealthier classes. What they actually produced was a more densely built-up estate for the less well-off.

Some of the homes were built on plots bought by working people with the help of loans from co-operative buildings societies such as the Friends of Labour, which opened a branch in Maitland Park in 1866. The grocers John James and Mary Ann Sainsbury opened their second shop at 159 Queen’s Crescent in 1873 and lived upstairs here until 1886.

In the 1960s many of the area’s original homes were demol­ished in a wave of council devel­op­ments, of which the largest was the Maitland Park estate, flanking Maitland Park Villas – including on the former site of the orphanage.

Kentish Town City Farm was founded in 1972, when it was the first of its kind. It has subse­quently served as a model in the devel­op­ment of the city farm movement as a whole. The farm is located on a four-and-a-half acre site off Grafton Road, on the edge of Gospel Oak, where it uses some original buildings from the time the railway was built.

Queen’s Crescent is one of London’s hidden cockney commu­ni­ties, with a street market held on Thursdays and Saturdays and plentiful inde­pen­dent shops. Never­the­less, it is an indi­ca­tion of the area’s absence of amenities that the mayor of Camden cut a cele­bra­tory cake when she offi­cially opened the street’s first free cash machine in 2005.

Estate agents – and even some renegade cartog­ra­phers – have recently begun to reinvent Maitland Park as ‘Lower Belsize Park’, in an attempt to distance the locality from Kentish Town and move it closer to Hampstead.

However, it better suits live music venue the Fiddler’s Elbow (shown in the photo at the top) to describe itself as being ‘in the heart of Camden.’ As is often the case with such termi­nology, ‘in the heart of’ actually means ‘somewhere near’.

The political philosopher Karl Marx lived at addresses in Grafton Terrace and Maitland Park Road from 1856 until his death in 1883.

* The picture of the Fiddler’s Elbow at the top of this page is adapted from an original photograph, copyright David Anstiss, and the picture of Maitland Park Road is modified from an original photograph, copyright Mike Quinn, both at Geograph Britain and Ireland, made available under the Attribution-ShareAlike 2.0 Generic Licence. Any subsequent reuse is freely permitted under the terms of that licence.