The south-western corner of Hampton, fringed by parkland and playing fields that back onto the reservoirs of Hanworth and Kempton Park 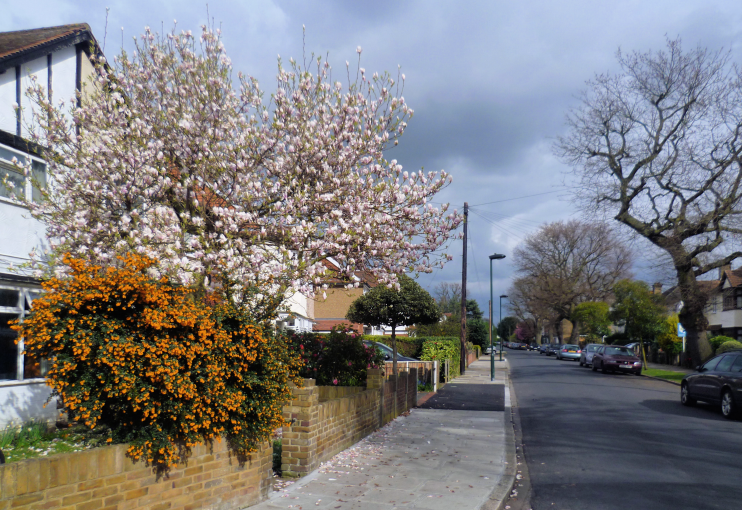 The earliest recorded property here­abouts was Newhouse, later known as the Old Farm House, which was in existence by the late 16th century and survived (though probably in rebuilt form) for almost 400 years.

By the mid-19th century the farm was known as Tangley Park. Its owners built the ‘commodious’ Royal Hotel on their land in 1867 but the structure was never used for its intended purpose. Instead it became the Female Orphan Home when the insti­tu­tion moved here from Waltham­stow in 1869.

Major WB Marling purchased the estate in 1890 – renaming it after himself – and an exceed­ingly slow process of suburban devel­op­ment got under way.

All Saints Hampton, by the prolific church archi­tects FH Greenaway and JE Newberry, was conse­crated in 1908 but not completed until later – and without its planned tower.

On Oak Avenue, at the corner of South Road, the Royal Oak was orig­i­nally built as two houses in 1921 then converted into a pub in 1924.

Most of the present prop­er­ties in Marling Park date from the 1930s and 1950s, with semi-detached houses fronting verdant avenues. The varying finishes subse­quently applied to the external walls aggravate the archi­tec­tural dishar­mony – but the abundance of mature trees makes up for a lot.

Old Farm House was demol­ished in the 1960s and the area to its north was developed from 1973 onwards as Hampton Nurs­ery­lands, which will be the subject of a separate page on Hidden London sooner or later.

Though it continues to appear on A–Z maps, the name Marling Park is largely unrecog­nised by local residents, who simply think of this locality as part of Hampton, or specif­i­cally Hampton Nurs­ery­lands on the north side.

* The picture of Holly Bush Lane at the top of this page is adapted from an original photograph, copyright Marathon, and the picture of Oak Avenue is adapted from an original photograph, copyright Stefan Czapski, both at Geograph Britain and Ireland, made available under the Attribution-ShareAlike 2.0 Generic Licence. Any subsequent reuse of either image is hereby freely permitted under the terms of that licence.