A rarely used name for the eastern edge of Lower Edmonton, focused around the northern end of Montagu Road 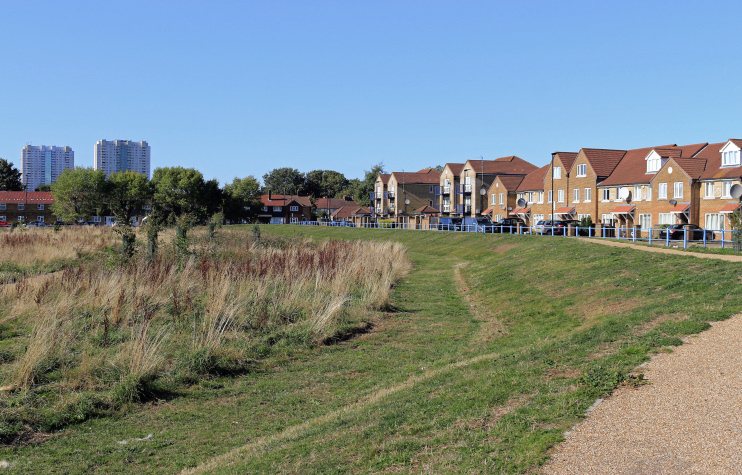 Marsh Side was earlier known as Jeremy’s Green or, more curiously, John a Marsh Green. The Marshes were a family of Norman origin who took a new surname from Edmonton Marsh, where they lived from the 13th century. John Marsh died around 1312 and divided his lands among four sons and two daughters in his will. It is therefore possible that Marsh Side gained its name because this was the Marsh family’s side of Edmonton, rather than on account of the unde­ni­ably boggy terrain.

There were cottages and an inn here around 1600, surrounded by farmland. The inn was called the Cart Over­thrown by 1752. In 1801 Marsh Side had 31 dwellings, including neigh­bouring farmhouses.

Marsh Side at last showed signs of growth from the mid-19th century as Edmonton began to expand in all direc­tions. Baptists estab­lished a chapel here around 1890 but the congre­ga­tion must have proved unsat­is­fac­tory as it closed after barely five years. Industry and a sewage works filled most of the former farmland east of Montagu Road (which was earlier called Jeremy’s Green Lane and later renamed after the banker and phil­an­thropist Samuel Montagu) during the first half of the 20th century, while housing was built to the west.

The area was left heavily cratered by Second World War bombing and never recovered its earlier vitality. In 1949 Edmonton borough council decided to create the Claver­ings indus­trial estate on the site of a farm of that name, which had been in existence since the 14th century. Factories were built here in the 1950s and early 1960s but – as with most London indus­trial estates – it’s now more of a (small) business park.

Enfield council (the successor to Edmonton) built the 22-storey Walbrook House near the eastern end of Bounces Road in 1967–8. The construc­tion alongside the railway line of Meridian Way in the early 1990s helped to regen­erate indus­trial and commer­cial life in the area, at least for a while.

In 2002 Laing Homes laid out an estate to the east of Montagu Road on the site of former allot­ments, with prop­er­ties ranging from one-bedroom flats to five-bedroom houses. Some of the housing (on Zambezie Drive) is shown in the photo­graph at the top, together with recently completed improve­ments to flood preven­tion land­scaping beside Salmon’s Brook.

The Cart Over­thrown closed in January 2017, probably for good. The pub had been rebuilt in the 1930s and was latterly just called the Cart.

At the last census, the locality’s main ethnic group was white British, followed by people of black African, black Caribbean and Turkish heritage. Around two-thirds of residents were born in the UK. 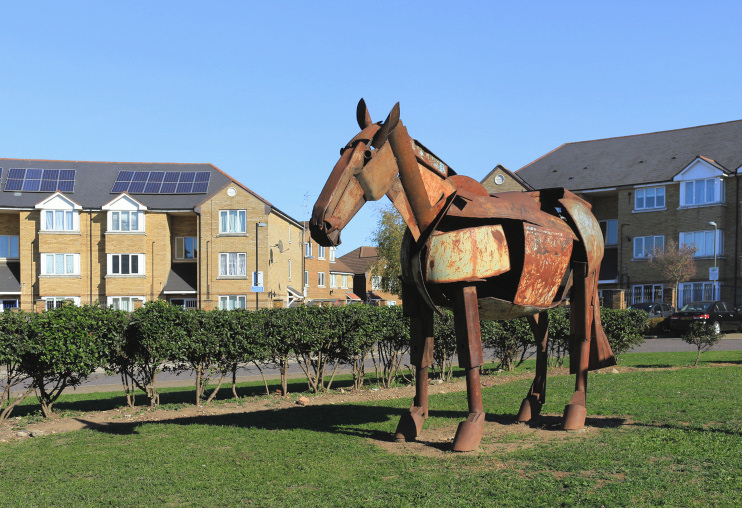 Shown in the photo above, Monty the metal horse is an installation at Chad Crescent, commissioned in 2003 by the London & Quadrant Housing Trust and the Metropolitan Housing Trust to mark their 40th birthdays. Made from recycled materials, Monty is the work of the sculptor Iain Nutting.

* The pictures of flood storage by Salmon’s Brook and the horse on the lawn, Montagu Road, on this page are both slightly modified from original photographs, copyright Des Blenkinsopp, at Geograph Britain and Ireland, made available under the Attribution-ShareAlike 2.0 Generic Licence. Any subsequent reuse is freely permitted under the terms of that licence.