A Metroland suburb situated between Kenton and Harrow 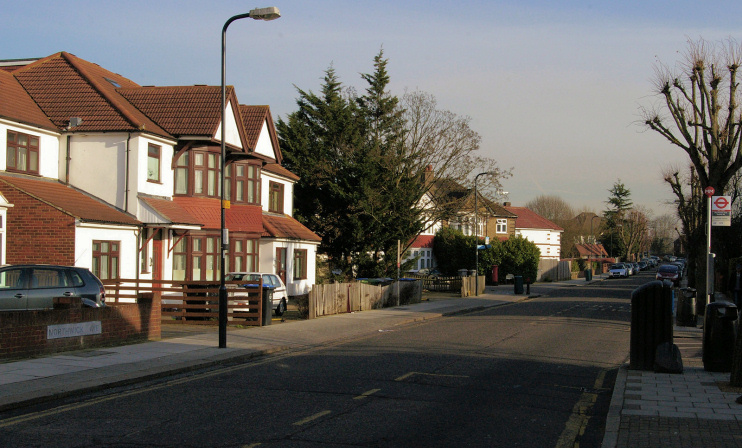 In 1905 Harrow school bought 192 acres of Sheepcote Farm to thwart plans for devel­op­ment near the school and the fields were converted into a golf course that opened two years later. The rest of the farm was laid out with streets by 1914 by the estab­lished owners of the land, the Churchill-Rushout family. Northwick Park was their estate in Worces­ter­shire and several of the new roads were given the names of places in its vicinity.

Housing was not built until after the opening of the station in 1923. Captain Spencer-Churchill’s original intention was to create “a unique specimen of town planning, the largest and best laid out estate near London” but the end result was more prosaic. In 1936 the council bought the remaining land for use as open space.

Harrow technical college was estab­lished here in 1959 and replaced most of Northwick Park golf course. The college has since become the Harrow campus of the Univer­sity of West­min­ster. The substan­tial Northwick Park hospital was built from 1962 onwards on some of the public open space. It is now part of the London North West Health­care NHS Trust.

The Northwick Park ward is the second least deprived in the borough and has the lowest crime level. Residents of Indian birth or descent make up the largest minority, followed by white British.

Sybil Fawlty receives treatment for an ingrowing toenail at Northwick Park hospital in the classic ‘Germans’ episode of the television comedy Fawlty Towers, making a long journey from Torquay for a relatively minor procedure.

* The picture of Northwick Avenue on this page is adapted from an original photograph, copyright Christopher Hilton, at Geograph Britain and Ireland, made available under the Attribution-ShareAlike 2.0 Generic Licence. Any subsequent reuse is hereby freely permitted under the terms of that licence.