A poor man’s Muswell Hill, as architectural historian Nikolaus Pevsner called it, consisting of an Edwardian core surrounded by interwar estates on the borders of Southgate, Winchmore Hill and Bowes Park 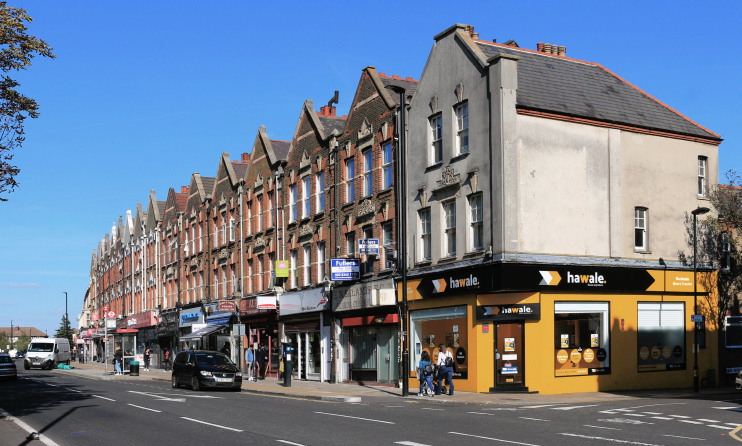 There was a Palmers Field here in 1204 and a road called Palmers Green in 1324 but there is no record of a settle­ment until the late 16th century, when there were four houses.

The Broom­field Park estate belonged to the City of London alderman Sir John Spencer in 1599. Two centuries later Sir William Curtis, another alderman, acquired nearby Cullands Grove. It is Curtis who is remem­bered in the name of Alderman’s Hill – and who is credited with orig­i­nating the term the ‘three R’s’ for reading, writing and arith­metic. Some sources suggest that he meant this in all seriousness.

After Curtis’s death, Cullands Grove was acquired by John Taylor of Grov­e­lands, who demol­ished the house and incor­po­rated the grounds into his estate. By 1801 Palmers Green had 54 dwellings, including two inns and two farms.

Despite the opening of the station on Aldermans Hill in 1871, little devel­op­ment occurred at first, mainly because wealthy landowners like the Taylor family had no need to sell. One estate was offered in lots in 1879 but few houses had been built on it by the end of the 19th century.

The sale of several more estates after the death of their owners and a rush of interest from builders resulted in the devel­op­ment of almost all the land near the railway between 1900 and 1918. Large semi-detached houses went up on the Taylors’ lands between Aldermans Hill and Fox Lane. 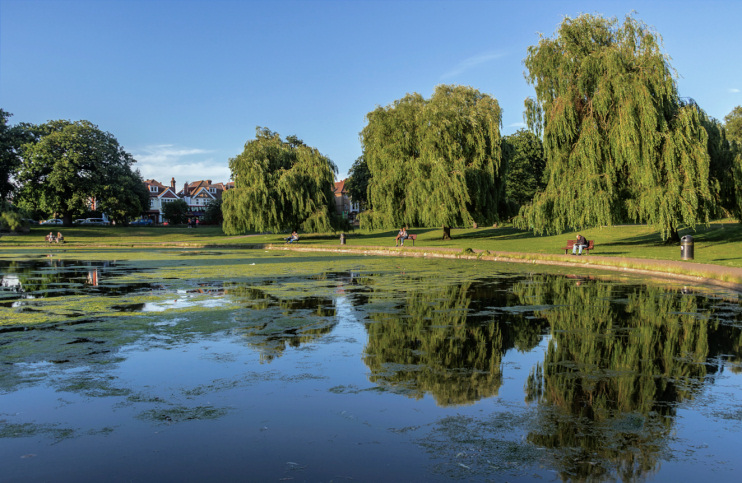 The 54-acre Broom­field Park (shown above) opened to the public in 1903 – the same year in which Vyell Edward Walker (of the Arnos Grove Walkers) laid the foun­da­tion stone of St John the Evan­ge­list, the church for the new parish of Palmers Green (shown below). It was completed in 1908 – the year in which the last haymaking is said to have been done in Fox Lane.

Around the corner from St John’s, the Roman Catholic church of St Monica was opened in 1914 by Cardinal Bourne, Arch­bishop of West­min­ster. The church nowadays hold a weekly service in Polish, in addition to its daily masses in English.

In the 1920s and 1930s semi-detached and terraced houses appeared south of Broom­field Lane and in the east of the district, south of Hedge Lane. After the Second World War building was mainly confined to the replace­ment of bomb-damaged properties.

In the south of the district, Palmers Green mosque and an adjacent community and education centre were built in several stages, beginning in 2000, in a corner of Oakthorpe sports ground.

Numerous larger houses have been subdi­vided, while recent new builds have consisted primarily of flats (as almost every­where in built-up London).

Improve­ments to the ‘town centre’ have included the instal­la­tion of a trian­gular clock at Palmers Green Triangle in summer 2014. While it is not a great work of horo­log­ical art, public time­pieces are almost always worth having.

Many Palmers Green’s residents live in private rented accom­mo­da­tion. The ward has the borough’s highest propor­tion of ‘other white’ residents, which in this case mostly means those of Turkish or Greek descent.

The poet Stevie Smith was born in Hull in 1902 and her family moved to Palmers Green less than five years later. They settled at 1 Avondale Road, which was to remain her home until she died in 1971. Smith’s writings contain many thinly disguised allusions to Palmers Green and its residents, including an unpleasant caricature of her bank manager.

Paul Scott, author of The Raj Quartet, grew up in Palmers Green.

The rock musician Joe Strummer shared a house at 18 Ash Grove in 1971, while he was a student at the Central School of Art and Design.