The original exchange at Cornhill was founded by Sir Thomas Gresham, whose crest was a grasshopper. Opened by Elizabeth I in 1568, the building was modelled on the Bourse at Antwerp as a place for London merchants to transact their business. It burned down during the Great Fire of London and a new exchange was opened in 1670, but this was again destroyed by fire in 1838. It is said that before the bells fell they had chimed: ‘There’s nae luck aboot the hoose.’

The third building was designed by William Tite and opened by Queen Victoria in 1844. So far it has managed to avoid fiery disaster.

In 1939 the Exchange ceased its original function and the building was taken over by the Royal Exchange Assurance Corpo­ra­tion, which had occupied offices there since 1720. The London Inter­na­tional Financial Futures Exchange (now NYSE Liffe) was based at the Royal Exchange from its inception in 1982 until its move to Cannon Bridge House in 1991.

The Royal Exchange was remod­elled as a luxury shopping and dining mall in 2001. Jewellers, watch­makers and fashion accessory boutiques predom­i­nate and there are six cafés and restaurants.

“There is no place in the town which I so much love to frequent as the Royal Exchange. It gives me a secret satis­fac­tion, and in some measure gratifies my vanity, as I am an Englishman, to see so rich an assembly of coun­trymen and foreigners consulting together upon the private business of mankind, and making this metrop­olis a kind of emporium for the whole earth.” 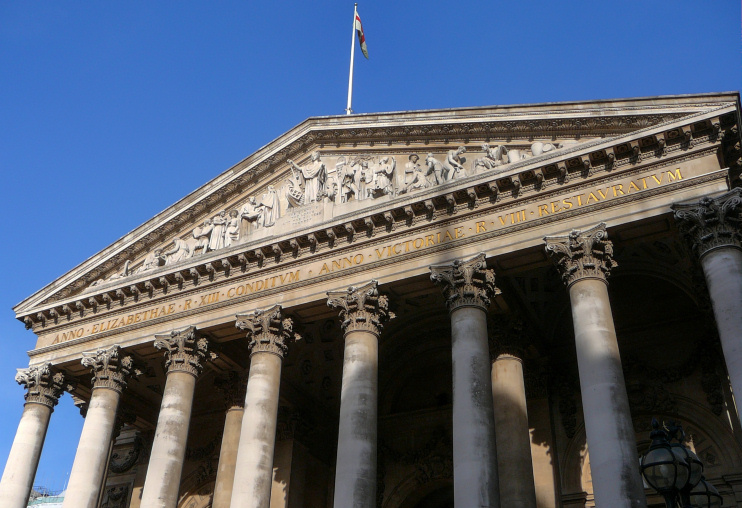