In 1958 motorbike enthu­siast and part-time repairman Bill Crosby bought the name and goodwill of Reg Allen Motor­cy­cles, then located in North­fields. After months of waiting for Mr Allen to move out it tran­spired that the shop itself was not part of the deal. A hunt for premises found Bill’s shop in Grosvenor Road, on the eastern edge of Hanwell. Bill ran the shop until 2018, when, having reached the age of 86, he decided to call it a day.

Bill’s personal hoard of choice bikes first went on public display as a sideshow attrac­tion to a motoring bookshop and its collec­tion of vintage cars at Syon Park in the mid-70s. When the premises closed in 1979 the motor­cycle collec­tion – which at that time consisted of just a couple of dozen machines – was exiled to Derbyshire for a decade, and later dispersed among friends for safekeeping.

In 1997 Bill heard word of the avail­ability of a former farm stable block (and latterly council depot) in Greenford – and the London Motor­cycle Museum opened here two years later. It’s not exactly a buzzing locale (on TripAd­visor the museum is ranked No.1 of one thing to do in Greenford) and the frontage is dull but inside it’s an Aladdin’s cave, a two-wheeled treasure trove.

The museum now has more than 100 bikes of its own and another 100 on long-term loan, notably from the British Motor­cycle Char­i­table Trust and the Trident & Rocket 3 Owners Club. The collec­tion includes a 1902 Ormonde, a Scott Flying Squirrel and a 1923 Wooler inline twin, built just down the road in Alperton. In addition to the various ‘rare breeds’ there are numerous BSAs, Nortons and Royal Enfields.

The bikes in the main hall are arranged chrono­log­i­cally, so that the evolution of the British motor­cycle stretches out before you as you enter – beginning with machines that weren’t much more than pushbikes with little engines attached. (They even had bicycle-style brakes, as the picture bottom-left shows.)

At the end of the hall, a stylish set of cabinets displays the trophy haul of Derek Minter, the ‘King of Brands’, who died in 2015.

Out of a side door and down a path there’s a barnful of Triumphs – Bill Crosby’s favourite motor­cycle marque. Exhibits here include ten proto­types and the last Triumph T140 out of the Meriden gates in 1983.

The museum struggles to break even and if it can’t cover its costs here it may have to move out of London, which would be a calamity. Ways to help the museum include member­ship and ‘adopt a bike’ schemes. 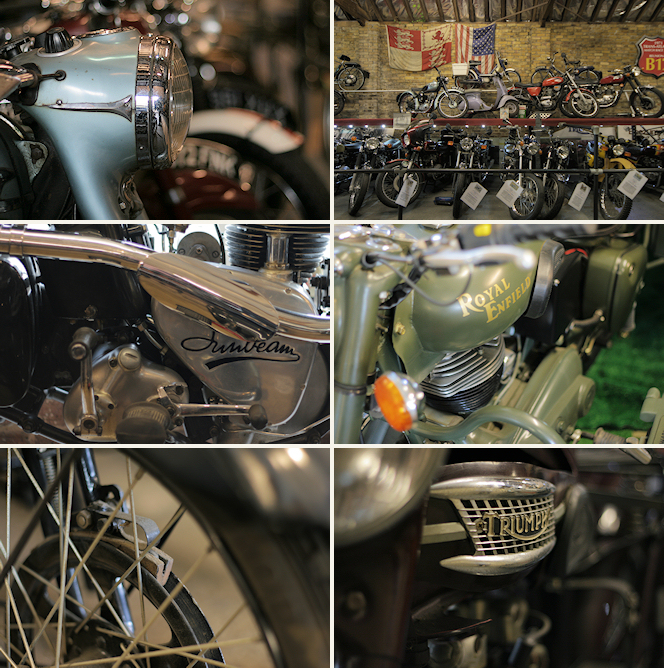