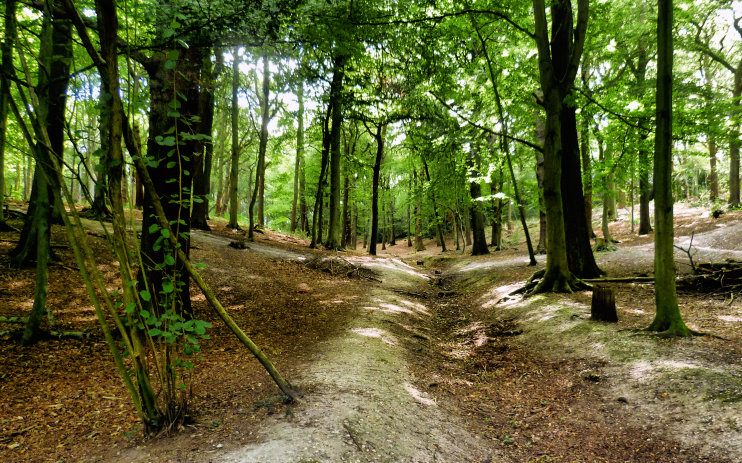 Croham’s name was first recorded in 1225 as Craweham, ‘a homestead or enclosure frequented by crows’.

Croham Hurst is a 477-foot hill with evidence of intensive prehis­toric use, including a (now barely percep­tible) burial mound that dates from around 2000bc. The absence of subse­quent relics indicates that the infertile hilltop was abandoned when settlers moved to the valley to cultivate crops. The photo­graph above* shows the view from the path leading up from Croham Valley Road as it enters the main woodland and heads up to the summit plateau.

The manor of Croham was one of four in the parish of Sander­stead and was acquired in the late 16th century by Arch­bishop Whitgift. It later became the property of the schools that the arch­bishop founded in Croydon.

In 1898 the governors of the Whitgift Foun­da­tion planned to sell the lower slopes for devel­op­ment, while offering the hilltop to the council.

Following public protests the foun­da­tion sold the whole of Croham Hurst to Croydon corpo­ra­tion, while playing fields for Old Whit­gif­tians were laid out on Croham Farm.

Croham Hurst school was founded in 1899 for day girls and boarders, and moved to Croham Road in 1907. The school closed in 2008, when it was absorbed by Croydon’s Old Palace School.

Croham Hurst golf club was estab­lished in the 1920s and suburban housing was built beyond the protected slopes, notably in the form of Richard Costain and Sons’ Croham Heights estate in 1927.

The Croham ward has a higher propor­tion of well-educated, young, single people than most parts of the borough.

The comedian and television presenter Sue Perkins was educated at Croham Hurst school.

* The picture of The woods of Croham Hurst on this page is adapted from an original photograph, copyright Marathon, and the picture of the Pavilion, Old Whitgiftian Association Recreation Ground is adapted from an original photograph, copyright Nigel Chadwick, both at Geograph Britain and Ireland, made available under the Attribution-ShareAlike 2.0 Generic Licence. Any subsequent reuse is hereby freely permitted under the terms of that licence.