This hitherto run-down Leaside area, divided from the rest of Hackney by the East Cross Route, is presently exhibiting a flowering of cultural creativity 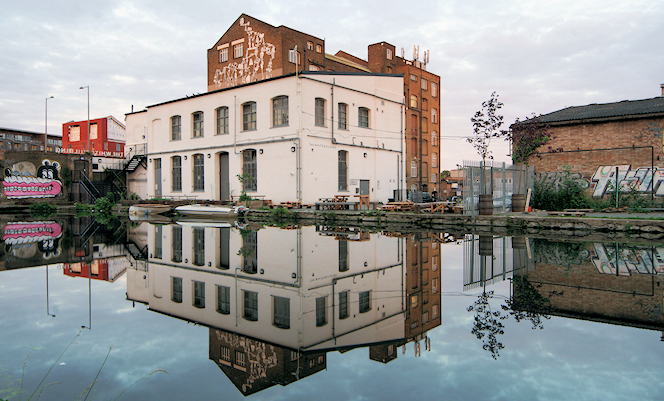 A ‘wick’ often signified an outlying dairy farm and the ‘ferm of Wyk’ was recorded in the 13th century.

By the late 18th century the small hamlet had gained a silk factory and the Wick went on to play a distin­guished role in east London’s indus­trial history. The use of the word ‘petrol’ was pioneered in Hackney Wick – by Carless, Capel and Leonard, who carried on their refining business here for over a hundred years from 1860. Among the district’s many other claims to indus­trial fame, Matchbox toys were made at Lesney’s factories, Clarnico (Clarke, Nickolls and Coombs) was the country’s largest confec­tioner and the Lion Works housed activ­i­ties by the entre­pre­neur Achilles Serre, who intro­duced dry-cleaning to England.

However, the growth of industry contributed to social decline in Hackney Wick, which was described in 1879 as a district of 6,000 people who had sunk to the lowest depths, and it became notorious for its jerry-built housing. The parish church of St Mary of Eton with St Augustine was founded in 1880 by Eton College, which wanted to perform char­i­table work in a poor part of London.

From the 1930s the municipal author­i­ties set about improving condi­tions in Hackney Wick, opening public baths and a library and clearing slums to put up blocks of flats, notably in the 1960s. Several eyesores built during that period have already been torn down: St Mary’s Village has replaced the tower blocks of the Trow­bridge estate with a mixed tenure devel­op­ment of houses and flats.

Hackney Wick did not gain its station (orig­i­nally intended to be called Wallis Road) until 1980, when the North London line was reopened to passenger services, although it had earlier been served by a station at Victoria Park.

After a period of stag­na­tion, several sites in Hackney Wick have recently been under­going regen­er­a­tion and the proximity of the Olympic Park has enhanced the local­i­ty’s appeal.

Numerous artists and designers have set up studios here – and in neigh­bouring Fish Island – in old ware­houses and disused indus­trial premises – and a canal-side centre for art, tech­nology and sustain­ability called the White Building opened in 2012. It’s shown in the image at the top of this page.

Many homes in Hackney Wick are rented from a social landlord or from the council, and signif­i­cant pockets of poverty persist in the locality. However, at least part of the Wick has been under­going “rampant gentri­fi­ca­tion” – as the Hackney Gazette described it – which is often the stage that follows the arrival of a creative community.