Highlights from the 2011 census

The Office for National Statis­tics released ward level popu­la­tion figures from the 2011 census on 30 January 2013, broken down by religion and ethnicity. 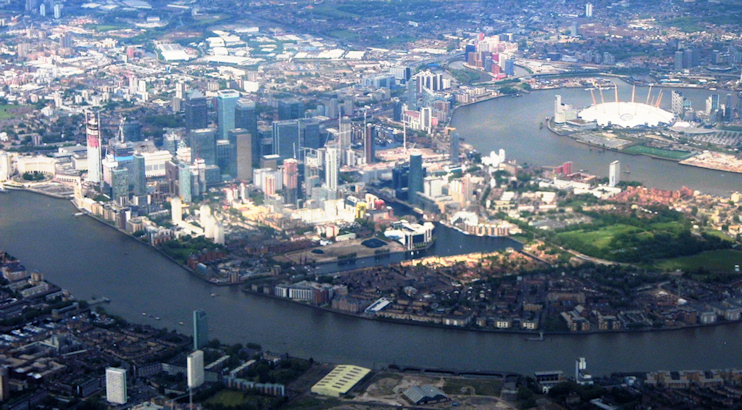 Local govern­ment bound­aries are usually drawn so as to include roughly the same number of voters in each of a borough’s wards, so not much can be inferred from the total number of residents of any indi­vidual ward at one point in time. However, changes in ward popu­la­tions between 2001 and 2011 are sometimes revealing.

Very few London wards have expe­ri­enced a decline in popu­la­tion. Those that have are either out in the sticks (like Biggin Hill or Selsdon) or in the very wealth­iest central parts (such as Hans Town and Brompton). In the latter case, these local­i­ties are tending to get even wealthier and an increasing number of prop­er­ties may not be their owners’ primary places of residence.

The only working-class, inner-city locality to have undergone a popu­la­tion decline is Walworth, where ambitious rede­vel­op­ment schemes have been preceded by wholesale ‘decanta­tion’ of residents from blocks of flats scheduled for demolition.

The fastest growing places have been West­min­ster’s Church Street ward and Tower Hamlets’ wards of Millwall and Blackwall & Cubitt Town. Between them, the latter pair cover the whole of the Isle of Dogs – where mountain ranges of apartment blocks have been erected in recent years. Church Street’s growth, however, seems to have resulted from increases in household size: this is now a very over­crowded locality.

Already one of the world’s most cosmopolitan cities, London has gained even greater diversity over the past decade.

Dollis Hill has the greatest number of Irish residents of any ward in London, followed by Mapesbury, Fryent, Kilburn and Willesden Green, all in the London Borough of Brent.

The wards with the largest Indian commu­ni­ties are Ealing’s Southall Green and Southall Broadway and Brent’s Wembley Central and Alperton. There are, however, signif­i­cant differ­ences between those two boroughs’ Indian commu­ni­ties. In Ealing (Southall), Sikhs are the largest religious group, though there are also many Hindus and Muslims. Brent’s strongly Indian wards are mainly Hindu, with rela­tively few Muslims and very few Sikhs.

Redbridge’s Loxford ward – located between Ilford and Barking – has the greatest number of residents of Pakistani birth or descent. Neigh­bouring Clementswood ward comes next. After those come three wards on the east side of Newham.

Members of the Bangladeshi community over­whelm­ingly choose to live in Tower Hamlets or, failing that, Newham. In Tower Hamlets’ wards of St Dunstan’s and Stepney Green, Shadwell, Bromley-by-Bow and Bethnal Green South more than 40 per cent of residents are of Bangladeshi heritage.

The ward of Thames­mead Moorings has by far the most residents of black African descent. Peckham, which used to top that list, now comes second.

Croydon’s Thornton Heath has the most residents of black Caribbean descent, followed by Lewisham’s Catford South and Croydon’s Bensham Manor (which is actually just more of Thornton Heath). Next come two of the better known centres of Caribbean culture: Lambeth’s Cold­har­bour ward (in Brixton) and Brent’s Harlesden.

As in many parts of Britain, London has a growing number of residents of mixed ethnicity, espe­cially south of the river in the boroughs of Lambeth, Lewisham and Croydon. The latter’s adjoining wards of Woodside and Selhurst have the highest popu­la­tions in the ‘mixed/multiple ethnicity’ group, of whom most are of mixed white and black Caribbean parentage.

No longer drawn to Soho or Little Italy, except perhaps for Sunday worship, London’s Italians are inclined towards the streets north of the Fulham Road, espe­cially those in West Bromp­ton’s Redcliffe ward, which has many residents from elsewhere in conti­nental western Europe too. The adjoining Court­field ward and West­min­ster’s Lancaster Gate also have marked concen­tra­tions of western Europeans.

Enfield and Haringey consti­tute London’s Turkish heartland. All the top 20 ‘most Turkish’ wards are in those two boroughs and Edmonton is the capital of London’s Ottoman empire.

Only one ward in London has more than a thousand residents of Greek or Greek Cypriot origin: Enfield’s Palmers Green. Cock­fos­ters, also in Enfield, and Barnet’s Brunswick Park have the next largest Greek populations.

Main­taining a tradition that dates back more than half a century, Ealing is by far the most popular borough for London’s Polish community. Nine of the top ten ‘most Polish’ wards are in Ealing – mostly in the borough’s northern sector – with Perivale at the top of the list, followed by Greenford Green. This author once boarded a break-of-dawn Polish minibus service from Ealing Broadway to Stansted airport: the tour of pick-ups in and around Greenford took longer than the entire remainder of the journey.

Wandsworth’s Thames­field ward – which takes in the part of Putney lying north of the Upper Richmond Road and the north-west corner of Wandsworth itself – has the most Australians and New Zealan­ders. It’s followed by East Putney and the Battersea wards of Northcote and Shaftes­bury, all in the London Borough of Wandsworth. Clapham, Balham and Shep­herd’s Bush are also antipodean hotspots.

In the London Borough of Kingston upon Thames, New Malden’s two wards (Beverley and St James) have London’s greatest numbers of Koreans. The next four ‘most Korean’ wards are all near neigh­bours of New Malden.

London’s Nepalese community has plumped for Plumstead. While most of the capital’s wards have fewer than ten Nepalese residents, Plumstead has 1,687 and the adjacent Glyndon ward has another 1,093. These two wards, which account for 0.2 per cent of London’s total popu­la­tion of 8.2 million, have 13 per cent of the city’s Nepalese (including Gurkhas).

Religion (or lack of it)

The five least religious wards are all in the same neck of the woods: Haringey’s Stroud Green, Crouch End and Muswell Hill and Hackney’s Clissold and Stoke Newington Central. In heathen­most Stroud Green 42.7 per cent of residents declared that they followed no religion, compared with 36.5 per cent who professed Chris­tianity, 11.4 per cent who were adherents of other religions and 9.4 per cent who chose not to answer the question. Sixth in the irre­li­gious league is the City’s Alder­s­gate, where John Wesley felt his heart strangely warmed and went on to found what became the Methodist Church in nearby City Road.

The most religious wards are Ealing’s Southall Green and Southall Broadway, where only 2 per cent of residents have no faith and Sikhism is at its strongest.

London’s most Christian locality is Upminster, where 75 per cent of residents stated their adherence to that faith.

London’s most Muslim wards generally corre­spond with those where the Pakistani and Bangladeshi commu­ni­ties are most numerous, and are all in east London: St Dunstan’s and Stepney Green, Green Street East and West, Loxford, Little Ilford, Shadwell and Bromley-by-Bow.

The capital’s Jewish community favours Barnet above all other boroughs, espe­cially the wards of Golders Green, (Hampstead) Garden Suburb, Hendon, Edgware and Finchley Church End. After these five, the largest numbers of Jewish residents are to be found in Hackney’s wards of Spring­field and New River, which take in Stamford Hill.

Barnet’s Mill Hill – for centuries home to religious noncon­formists of many shades – has the most Zoroas­trians, but there are only 36 of them here, repre­senting 0.2 per cent of the ward’s total popu­la­tion. The faith has 34 adherents (0.3 per cent of a smaller popu­la­tion) in Harrow’s Rayners Lane ward, where a former cinema has been converted into a Zoroas­trian centre.

A few other notable religious demographics:

* The photograph of the Isle of Dogs at the top of this page is adapted from an original photograph, copyright Anthony Parkes, at Geograph Britain and Ireland, made available under the Attribution-ShareAlike 2.0 Generic Licence. Any subsequent reuse is freely permitted under the terms of that licence.