Created by American property developers at the beginning of the 20th century, Golders Green has historically been renowned as a home of London’s middle-class Jewish community 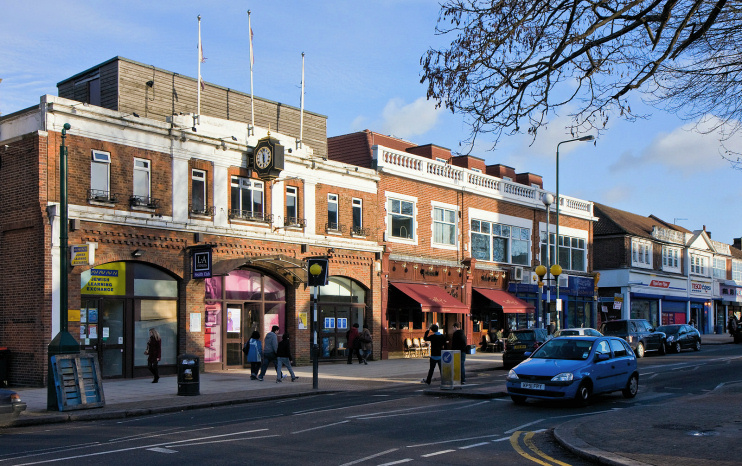 The ‘Golders’ name probably derives from a 14th-century resident called Godyere. A number of ‘orna­mental villas’ appeared from the late 18th century and the cross­roads that forms the hub of Golders Green was created by the arrival of the Finchley Road in the late 1820s.

The London County Council’s acqui­si­tion of Golders Hill House and its gardens in 1898 brought the first public park to the urban district of Hendon. This was followed by rapid suburban devel­op­ment of the neigh­bour­hood and Golders Green’s first shopping parade was estab­lished in 1908.

The Golders Green Hippo­drome opened in 1913. It has served as a music hall, cinema, theatre and BBC recording studio.

After the First World War a large number of Jewish families began moving into the new housing from the crowded East End and syna­gogues were built to serve the community. Immigrant Jews fleeing Nazi perse­cu­tion augmented the settle­ment during the 1930s. At the same time, the builders Laing laid out the racetrack-shaped Golders Green estate in the south-west corner of the district. Crick­le­wood Aerodrome had occupied the site from 1916 to 1930. The 1930s also saw the erection of mansion blocks in central Golders Green.

In recent years new commu­ni­ties, espe­cially Korean and Japanese, have been moving into Golders Green – but Judaism remains the ward’s predom­i­nant faith, well ahead of Chris­tianity in second place.

The Hippo­drome was acquired for conver­sion to an Islamic centre in 2017, prompting a local campaign of resis­tance based on a variety of objec­tions, most of which were osten­sibly about the [allegedly excessive] “use of the building rather than the user”. In October 2021 the Hippo­drome was sold to the Hillsong ‘inter­na­tional megachurch’.

* The picture of Golders Green Road on this page is slightly modified from an original photograph, copyright Martin Addison, at Geograph Britain and Ireland, made available under the Attribution-ShareAlike 2.0 Generic Licence. Any subsequent reuse is hereby freely permitted under the terms of that licence.