Though Harrow has a posher repu­ta­tion, there is probably no educa­tional estab­lish­ment in London so refined as Dulwich College, which was built by the actor–manager Edward Alleyn in the mid-1610s, partly with money he had earned from licensing dogfights, bear-baiting and brothels. Two centuries later it gained the finest school art gallery in the world, with works by Hogarth, Gains­bor­ough, Rembrandt, Rubens, Canaletto and Van Dyck, among many others.

Most of the paintings at Dulwich were acquired by the London-based art dealer Noël Desenfans on behalf of King Stanis­laus II of Poland, and were intended to form the nucleus of a royal gallery in Warsaw. Desenfans was born in Flanders, which may explain the collection’s partic­ular emphasis on old masters from France and the low countries. King Stanis­laus ran into a few local diffi­cul­ties (culmi­nating in his dethrone­ment and the virtual erasure of Poland from the map) and the pictures remained with Desenfans, who, on his death, bequeathed them to his intimate friend Sir Francis Bourgeois, a Londoner of Swiss extrac­tion and member of the Royal Academy.

Bourgeois in turn bequeathed the collec­tion to Dulwich College, together with funds for the construc­tion and upkeep of a gallery to which the public would be admitted. The money turned out to be not quite suffi­cient for the purpose and Desenfans’s Welsh widow stepped in to make up the differ­ence. Sir Francis Bourgeois and Noël and Margaret Desenfans are entombed in the gallery’s mausoleum.

Francis Bourgeois’s friend Sir John Soane designed a home for the paintings that is a work of art in itself, with the interior walls evenly illu­mi­nated by inno­v­a­tive roof-lanterns (upward-projecting skylights, as shown at the top of the photo­graph below). The set of buildings also included almshouses for six old ladies, which have since been converted to display rooms for temporary exhi­bi­tions. Parts of the gallery had to be rebuilt after being bombed in the Second World War and the whole place was refur­bished in 2000, when a glass and bronze cloister was added, linking the original building with a new art studio, a very upmarket (and recently refur­bished) café and a meeting space called the Linbury Room.

Had London possessed a suitable national gallery of art at the time Bourgeois died, the paintings would have gone to that insti­tu­tion, where there would be no fee to view them, as used to be the case at Dulwich. In the 19th century the only charge levied upon visitors was a one shilling fine if they walked on the grass outside – a penalty once imposed on Prince Albert by a vigilant Alleynian. Nowadays, most adults must pay whether they trespass on the turf or not – the gallery receives no public subsidy so it relies on these charges, together with income from phil­an­thropy and commer­cial enterprises. 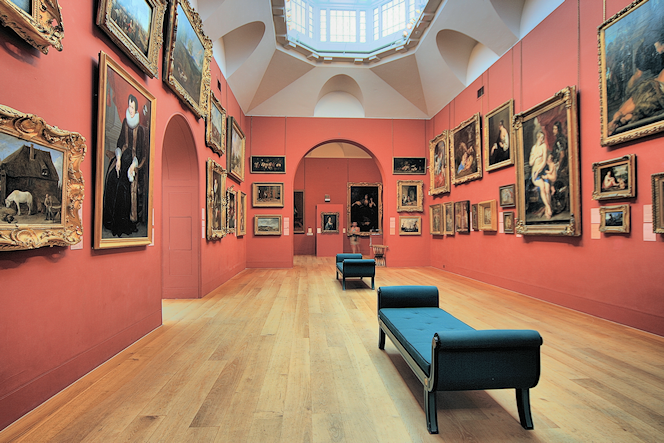