Sir John Soane was an architect and anti­quarian (1753–1837), born near Reading, Berkshire. He trained under George Dance the Younger, for whom he had first worked as an errand boy, and won Royal Academy medals for his archi­tec­tural drawings. In 1777 he travelled to Italy and spent three years studying classical archi­tec­ture. On his return he designed numerous public buildings, churches and country houses.

In 1788 he was appointed architect to the Bank of England and he later served as clerk of works at St James’s Palace, the Palace of West­min­ster and Chelsea Royal Hospital. Surviving Soane buildings in London include Bentley Priory, Dulwich Picture Gallery, Norwood Hall and Pitshanger manor house.

The Soane Museum or Sir John Soane’s House is an extra­or­di­nary collec­tion of books and manu­scripts, works of art, classical artefacts and casts and models of the remains of antiquity assembled by Sir John Soane as an ‘academy of archi­tec­ture’ in the connecting houses that he designed in Lincoln’s Inn Fields.

He bequeathed the buildings and the collec­tion to the nation because his wife and one of his sons prede­ceased him and he intensely disliked his surviving son. The collec­tion includes The Rake’s Progress, a ‘moral narrative’ painted in 1733–5 by William Hogarth and subse­quently made into popular engravings.

Admission is free and the museum is open from 10am to 5pm, Wednesday to Sunday and on bank holidays.

“Few people know of it, and fewer visit it, which is much to be regretted, since, though, as Dr Waagen says, the over­crowded and labyrinthine house leaves an impres­sion as of a feverish dream, it contains, together with much rubbish, several most inter­esting pictures.” 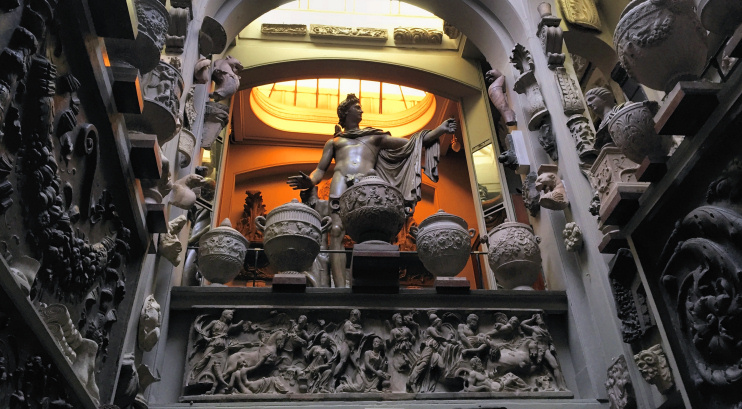 * The picture of John Soane’s Museum above is cropped and slightly modified from an original photograph, copyright Matt Brown, at Flickr, made available under the Attribution 2.0 Generic licence. Any subsequent reuse is freely permitted under the terms of that licence.