The ‘nice’ part of Southall, according to some, situated to the north-west of Osterley Park 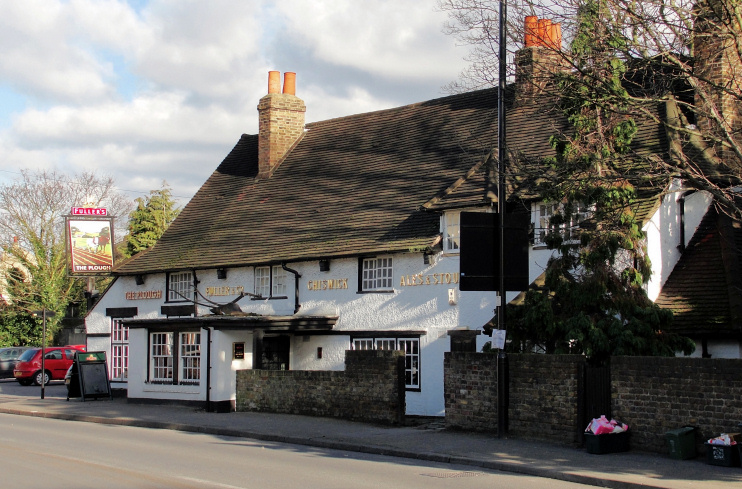 Orig­i­nally just called Norwood, it was first mentioned in a will of 832, which bequeathed the manor to the Arch­bishop of Canterbury.

St Mary’s church is of Norman origin and was rebuilt in the mid-14th century, when the Plough Inn was estab­lished to serve labourers working on the project.

The Plough was rebuilt in the 17th century and has since been altered in various ways. Several handsome villas were erected in the late 18th and early 19th centuries, most of which were lost to suburban development.

Shown in the photo below, Friars Lawn and the Grange are a pair of late-18th-century houses facing the green.

The local­i­ty’s finest survivor is Sir John Soane’s Norwood Hall, which he designed for a friend in 1803, in a similar style to his own Pitshanger Manor. The house, which has original Soane drawings and a large walled garden, was modified and extended by the Unwin family in the late 19th century.

Early in the 1920s the Unwins sold off much of Norwood Hall’s land to the builders Warren and Wood. Their estate’s streets are named after places in Dorset, Warren’s home county.

Norwood Hall itself and its remaining 19 acres of gardens were acquired by Middlesex county council and converted to a horti­cul­tural college.

The formation of the borough of Southall-Norwood in 1935 echoed the physical conver­gence of the two settle­ments on the former brick­fields between the railway line and the Grand Union Canal. A large part of Norwood Green was made a conser­va­tion area in 1969.

In 2009 Norwood Hall was acquired by the Sri Guru Singh Sabha Southall, a Sikh faith insti­tu­tion. Sikhism has more adherents than any other religion in Norwood Green.

In his poignant autobiography The Scent of Dried Roses, Tim Lott depicts the suburban aura of Norwood Green in the 1960s. “The neat houses are decked out with a jumble of modest details of dreamed life – a caravan or boat in the front yard, a cartwheel on the wall, carriage lamps at the entrances.”

* The picture of the Plough Inn at the top of this page is adapted from an original photograph, copyright Maxwell Hamilton, at Wikimedia Commons (originally at Panoramio), made available under the Attribution-Share Alike 3.0 Unported licence. Any subsequent reuse is freely permitted under the terms of that licence.