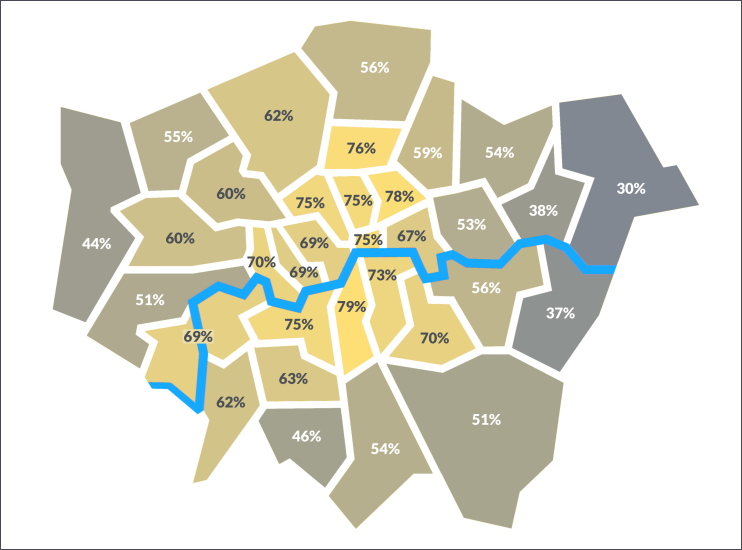 Unlike the nation as a whole, London voted deci­sively in favour of Britain’s continued member­ship of the European Union in the refer­endum held on 23 June 2016. More than than 2¼ million Londoners voted ‘Remain’, against just over 1½ million who voted ‘Leave’ – almost exactly a 60/40 split. But the ‘Remain’ camp’s strength varied widely across the capital.

The map above shows the percentage of ‘Remain’ voters in each London borough, and the City of London. As is imme­di­ately obvious from the shading, the vari­a­tions within the capital were almost as great as they were in the country at large – from as low as 30 per cent in Havering to the giddy heights of 79 per cent in Lambeth.† This is a reflec­tion of London’s disparate zonal demo­graphics and related attributes.

The clear support for ‘Remain’ in inner north London was probably the most predictable voting pattern of all the sub-regions.* Post-refer­endum polling shows that large majori­ties of voters who saw such things as multi­cul­tur­alism, feminism and the green movement as forces for good wanted to remain in the EU – and inner north London has lots of residents who think this way. In addition, the research indicates that black British voters were more likely to choose ‘Remain’ than any other major ethnic group – and this group is well repre­sented in Hackney and the eastern half of Haringey. Haringey also has a strong contin­gent whose families orig­i­nated from south-eastern Europe.

The boroughs of Tower Hamlets and Newham are extremely multi­cul­tural, with an espe­cially populous south Asian community, notably of Bangladeshi origin in Tower Hamlets. Away from the riverside, these boroughs have high numbers of residents working in unskilled or semi-skilled jobs. Tower Hamlets ‘Remain’ vote was lower than in any other unequiv­o­cally inner London borough. Never­the­less, the split was greater than two-thirds ‘Remain’ to one-third ‘Leave’. Newham, which has one foot in outer London, was much less Europhile – and its voter turnout was the capital’s lowest, at 59 per cent.

Lambeth supported ‘Remain’ more emphat­i­cally than any other area in the entire refer­endum except for Gibraltar. The borough has similar char­ac­ter­is­tics to much of inner north London, but with an added ingre­dient: this is increas­ingly an area of Spanish- and Portuguese-speaking residents – though many of them come from Latin America rather than Iberia. The same applies to South­wark’s Elephant and Castle locality too. Most of these new residents may not have had the right to vote, but Hidden London’s percep­tion is that their presence is widely appre­ci­ated rather than resented. Neigh­bouring Wandsworth and Lewisham are also increas­ingly cosmopolitan boroughs (with numerous Antipodeans in Wandsworth) – and outward-looking attitudes prevail.

The boroughs of West­min­ster and Kens­ington & Chelsea did not plump as strongly for ‘Remain’ as the inner north and south boroughs. At first glance this may seem surprising. This part of London is surely the bastion of the ‘priv­i­leged elite’ who are so resented by many Brex­i­teers. But, unlike the zones above, this is solidly Tory territory and its residents are rela­tively old. Across the country, Conser­v­a­tives and older people were more likely to choose ‘Leave’. Viewed in that light, it may be surprising that residents here voted as vigor­ously in favour of ‘Remain’ as they did.

This corner of London supported the ‘Remain’ cause more strongly than any other outer London zone – espe­cially Richmond upon Thames, where 69.3 per cent voted in favour despite its residents being rela­tively old. Why? Here we come to the single most signif­i­cant factor in voter choice at the refer­endum. The evidence shows that being well educated (or still in full-time education) corre­lated unmis­tak­ably with ‘Remain’ voting. This held true nation­wide, but partic­u­larly so in London. And Richmond residents tend to possess very good educa­tional qual­i­fi­ca­tions. Turnout in this zone was also stun­ningly high, at 78 per cent in Kingston and 82 per cent in Richmond.

Hillingdon was the only borough in outer west London to prefer ‘Leave’ but it was close in Hounslow. It seems possible that the working-class Asian community in this part of London was rela­tively Eurosceptic, but the polling data is not robust enough to confirm this. What is certain is that Hillingdon – which is markedly white British in most of its northern half – is a borough with rela­tively low levels of educa­tional attain­ment. As with other elongated boroughs, ‘Leave’ pref­er­ences in Hounslow and Ealing may have been distinctly stronger in the parts further from central London. The presence of Heathrow airport may have had an influence on some voters in this zone, but this could have been ‘Remain-positive’ because of local jobs or ‘Leave-positive’ because of the third runway issue.

Voters in this zone were more ‘Remain-positive’ – and tend to be better educated – than anywhere else in outer London except the south-west. It is not clear why Barnet proved more Europhile than its neigh­bours to the east and west – unless it was simply because the borough stretches closer to inner London. Barnet’s most distinc­tive demo­graphic char­ac­ter­istic is its populous Jewish community but there is no proof of a strong ‘pro-Remain’ pref­er­ence among that group – indeed there is some evidence to the contrary, primarily because of negative opinions regarding the EU’s stance on Israel.

In almost all ways, this sub-region is the most atypical part of London: it is the least cosmopolitan and multi­cul­tural, with the lowest levels of educa­tional attain­ment. Many older residents grew up in inner London and moved here as young adults. The demo­graphic profile is over­whelm­ingly white British, though the western part of Barking & Dagenham has been changing. Like several of London’s outermost boroughs, Havering and Bexley have more in common with the counties beyond them than with central London – and they voted accord­ingly. Every district in Haver­ing’s neighbour Essex voted ‘Leave’, as did all but one in Bexley’s neighbour Kent. Turnout was high in Havering and Bexley, indi­cating that voters felt strongly about their Eurosceptic stance. Further ‘inland’, Greenwich voted like (and has a demo­graphic profile like) a cross between its dissim­ilar neigh­bours on either side, Lewisham and Bexley.

The boroughs of Sutton, Croydon and Bromley were collec­tively split 51/49 in favour of ‘Remain’, with a rela­tively high turnout. Although there are local vari­a­tions (espe­cially in north Croydon and in New Addington, where things are very different) this is broadly the most comfort­ably-off part of outer London. Bromley is a famously Conser­v­a­tive borough and much of it feels more like rural Kent than part of the metrop­olis, while diminu­tive Sutton has common­al­i­ties with the neigh­bouring Surrey stock­broker belt. Sutton voted out – though by a narrower margin than the other (demo­graph­i­cally different) London ‘Leavers’. Many residents here are retired and own their homes outright, char­ac­ter­is­tics that tended to correlate with a ‘Leave’ vote. Rela­tively few possess higher educa­tional qualifications.

Multiple demo­graphic and socio-economic attrib­utes corre­lated partially with Londoners’ refer­endum voting choices, including affluence, age, socio-economic class, employ­ment status and to some degree ethnicity. Even religion may have played a part, with people calling them­selves Chris­tians being rela­tively likely to vote ‘Leave’, while atheists and Muslims were more likely to vote ‘Remain’. However, across London the clearest corre­la­tion was to be found in the diversity of educa­tional attain­ment. The boroughs with the densest concen­tra­tions of well-educated residents tended to be the places that most resolutely rejected the case for leaving the EU – and vice versa.

In the pair below, the map on the left has the same shading as the one at the top of this page: grading the ‘Remain’ share of the refer­endum vote from highest to lowest (darkest grey). The map on the right uses the same scale of shading to grade the boroughs of London by the percentage of econom­i­cally active persons aged 16–64 with a degree or equiv­a­lent or above (as at 2014). They’re not a perfect match, because other attrib­utes mentioned above doubtless also played a part – but they’re far closer than any other pairing.

Sources: Infor­ma­tion on refer­endum voters’ char­ac­ter­is­tics is primarily drawn from Lord Ashcroft’s ‘How Did You Vote?’ poll. Infor­ma­tion on boroughs’ demo­graphic, economic and social char­ac­ter­is­tics is primarily drawn from the London Data­s­tore’s borough profiles. BBC News gathered and analysed data for indi­vidual wards (where possible) in February 2017, and drew broadly similar conclu­sions to those above.

† TV news broad­casters seeking vox pops from Remainers and Brex­i­teers regularly take their cameras to the boroughs of Lambeth and Havering respec­tively. According to the 2011 census, a Lambeth resident is four times more likely to have a degree than a Havering resident.

* Inner north London takes in several local­i­ties that sections of the media love to stereo­type as the favoured resorts of the ‘liberal intel­li­gentsia’ (at best) or the ‘chat­tering classes’ and ‘champagne social­ists’. Places like Islington and Hampstead, though the latter is now too expensive for all but premier cru champagne social­ists. Plus hipsters in Shored­itch and Hoxton and assorted alter­na­tive types in and around Camden Town.