A busy road junction and its rapidly changing vicinity, situated in (and better known than) Newington, and often simply called ‘the Elephant’ 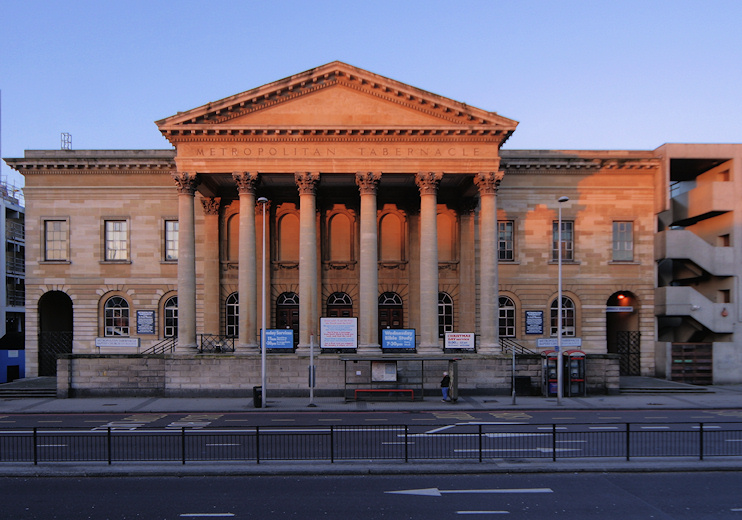 In 1641 John Flaxman set up a blacksmith’s forge on an island site here to take advantage of the passing horse-drawn traffic. Around 1760 the smithy was converted to a tavern that displayed a sign of an elephant and castle. There is almost certainly no truth in the widely held belief that the name is a corrup­tion of Infanta de Castilla (‘Princess of Castile’). The more likely connec­tion is with the old heraldic symbol of an elephant with a castel­lated tower on its back, which was espe­cially used by the Cutlers’ Company to indicate to the use of ivory in knife handles. The tavern became a coaching halt and thus gave its name to the junction.

This was already a densely built-up area by the time Charles Spurgeon estab­lished the Metro­pol­itan Taber­nacle in 1861. Shown at dawn in the photo­graph above, the taber­nacle has twice been rebuilt but its original portico survives.

The mainline railway station opened in 1863. In the Victorian era the station was nicknamed ‘the Animal’.† The City and South London Railway arrived nearby in 1890 and the Baker Street and Waterloo Railway added a connec­tion in 1906.

Before the junction was over­whelmed by motor traffic, this was a locality where people came to socialise, shop and be enter­tained. In 1913 Désiré Pasquet observed in Londres et les Ouvriers de Londres that “South London’s central edifice is a public house – the Elephant and Castle.”

Following its devas­ta­tion during the Second World War, the area was clumsily rede­vel­oped from the late 1950s with offices, academic buildings, housing estates and the Elephant and Castle shopping centre – a pioneer in its time but noto­ri­ously dismal in its latter days and not improved by its garish plastic cladding. With priority given to road traffic, pedes­trians were forced into a network of subways.

Notable for its three wind turbines, the Strata skyscraper was completed in 2010 and is the tallest of several resi­den­tial units to have appeared nearby over the past decade. Elsewhere in the area – and stretching into Walworth – a £1.5 billion regen­er­a­tion programme had been making elephan­tine progress – but has accel­er­ated recently.

The most signif­i­cant new devel­op­ments are Oakmayne’s Two Fifty One, Lend Lease Corpo­ra­tion’s Elephant Park and Delancey’s town centre rede­vel­op­ment, which proposes to “replace the existing, poor quality shopping centre with a new town centre which will future-proof Elephant and Castle for the long term and provide numerous benefits for both the local and borough-wide economy”. In addition, Southwark council has opened the Castle leisure centre at St Gabriel Walk, while the Artworks Elephant is a temporary ‘art, work and eat hub’ in repur­posed shipping containers on Elephant Road.

The Elephant and Castle shopping centre closed in September 2020, to make way for “a thriving new Zone 1 desti­na­tion” that will include “a range of high street and inde­pen­dent retailers, enhanced restau­rant and leisure oppor­tu­ni­ties and a new univer­sity campus for [the] London College of Communication.”

Shakespeare’s Twelfth Night is set in Illyria but some have taken this to be an idealised England, citing as evidence Antonio and Sebastian’s decision to lodge “in the south suburbs, at the Elephant.”

A shiny electrical substation in the centre of the Elephant and Castle roundabout doubles as a memorial to physicist and chemist Michael Faraday, who was born near here.

* The picture of the Elephant and Castle statue on this page is adapted from an original photograph, copyright Laszlo Ilyes, at Flickr, made available under the Attribution-ShareAlike 2.0 Generic Licence. Any subsequent reuse is hereby freely permitted under the terms of that licence.
† “‘Third-class Animal’ is, or was, quite understood by the railway booking-clerks of the district.” J Redding Ware, Passing English of the Victoria Era (1908)