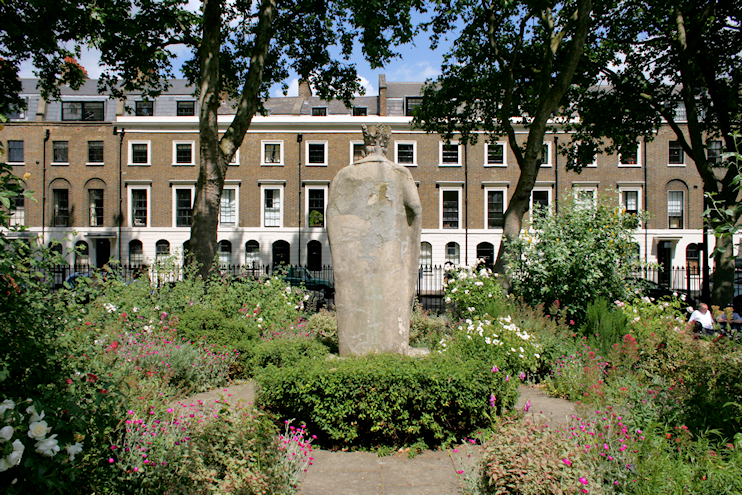 It seems likely that Newington (which means ‘new farmstead’) grew up after about 1200, when the estab­lish­ment of nearby Lambeth Palace brought increased traffic along the Kent road.

Until the second half of the 18th century Newington remained a sparsely populated farming village with a little industry, notably the manu­fac­ture of clay tobacco pipes. There­after, new roads brought devel­op­ment oppor­tu­ni­ties and landowner Henry Penton (who created Pentonville) began to sell off some of his farmland.

The 19th century saw increas­ingly dense house­building, mainly spec­u­la­tive but some phil­an­thropic. Trinity church was built in 1824 on land in the north of the parish that has belonged to the Corpo­ra­tion of Trinity House since 1661. The surrounding square was then laid out with smart terraced houses, some of which have since been converted laterally into flats across two or three house widths.

In addition to the church, the square’s garden is graced by a statue of uncertain age and prove­nance, probably depicting Alfred the Great. The rear of the statue is visible in the photo­graph above.*

With the magnif­i­cent exception of this estate, most of Newington was rebuilt during the course of the 20th century by a succes­sion of municipal authorities.

In 1975 Trinity church became Henry Wood Hall, a rehearsal and recording venue for several orches­tras – including the London Philharmonic.

Newington Gardens is a small recre­ation ground beside the Inner London Sessions House, a crown court that’s available to hire at weekends for events or filming.

The popu­la­tion of Newington is multi-ethnic, with white British residents consti­tuting the largest minority, followed by those of those of black African birth or descent. Most residents rent from the council and do not own a car. Unem­ploy­ment is high.

Newington Gardens occupies the site of Horsemonger Lane Gaol, once the largest prison in Surrey, which stood here for nearly a century from 1791. That same year saw the birth in Newington Butts of blacksmith’s son Michael Faraday, who went on to become a pioneer in chemistry and electrophysics.

* The picture of Trinity Church Square at the top of this page is slightly modified from an original photograph at Flickr, copyright Paul Simpson, made available under the Attribution 2.0 Generic licence. Any subsequent reuse is hereby freely permitted under the terms of that licence.