The oldest pub in London 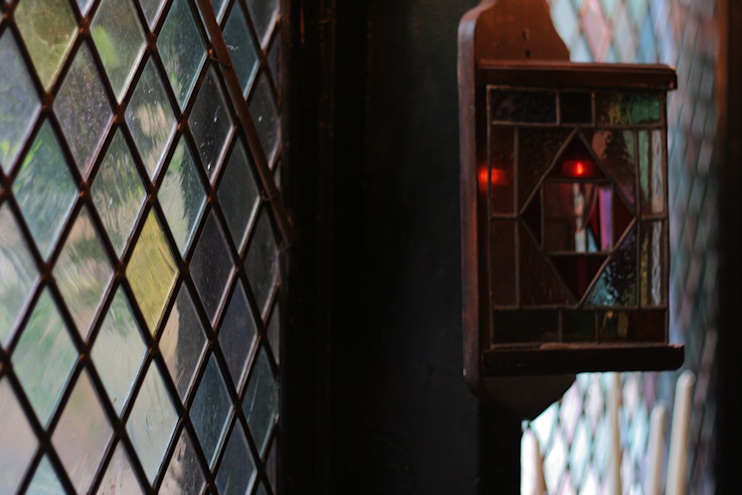 When you next see a sign outside a London public house that says something like ‘Estab­lished 1598’ it’s worth asking yourself: “In what specific way are they trying to fool me?”

Occa­sion­ally the signage doesn’t even refer to the pub, or the building it occupies. It’s the brewery that was estab­lished that long ago – and which is probably now part of some global drinks conglomerate.

Even if the sign does relate to the place itself, it’s possible that the building didn’t begin its existence as an alehouse or inn, or at least it can’t be proved to have done. Covent Garden’s Lamb and Flag (orig­i­nally the Cooper’s Arms) may be at least 50 years younger than the frame of the building it occupies – as its website clearly states, with cred­itable candour. A more extreme example is provided by the King William in Sipson, near Heathrow – a cente­narian pub in a building that may be 500 years old.

Or, most likely, the pub may have been estab­lished in (say) 1598, but not in the building to which the sign is now attached. All London pubs claiming to date from the 16th century or earlier have been pulled down and rebuilt at least once since 1600.

You’re less likely to see such claims in the City of London, the oldest part of the capital, because everyone knows the Great Fire of 1666 razed most of the City to the ground. But impostors are common­place on the City’s fringes. The website of Aldgate’s Hoop and Grapes asserts that the fire “stopped just 50 yards” from the site of the inn. Actually it was more like 500 yards. But that fact turns out to be irrel­e­vant. Most author­i­ties reckon the Hoop and Grapes dates from the late 17th century rather than from before the fire, and it probably hasn’t been a drinking estab­lish­ment for the whole of its existence. Never­the­less it’s a fine old building and is grade II* listed.

The genuinely old Olde Mitre, in Ely Court, is “genuinely old” in the 1772 sense, not the 1546 sense, as proclaimed on the signage outside. And the building was completely remod­elled inter­nally in the 1920s. But there’s no point in getting too hung up on remod­el­ling or the entire top 10 below might have to be discarded, including the esteemed Olde Cheshire Cheese and the lovely George Inn (shown below). 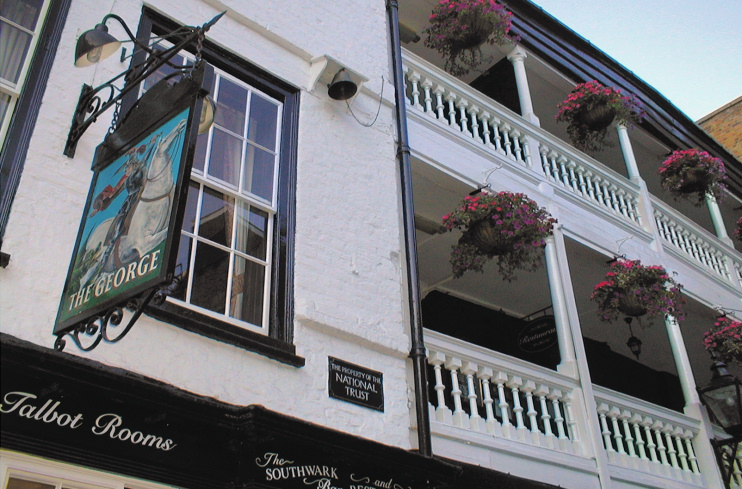 The George is London’s only grade I listed pub, despite the claim to that honour on the website of Smithfield’s Hand & Shears – “Estd. 1532” but entirely rebuilt in the early 1850s.

As well as the Olde Cheshire Cheese there are two other just-after-the-fire pubs on Fleet Street: the Old Bell Tavern and the Tipperary. The latter was rein­vented as an Irish pub in 1895 and gained its present name in 1967, to commem­o­rate the Great War song. For much more on the Tipperary – and its prede­ces­sors on the site – see this blog post.

Some of the most misleading miscre­ants – whether or not they make an ‘Estab­lished …’ claim – are the pubs that look really ancient, like the Dickens Inn, which was created in 1976 in a relocated and ‘restyled’ former warehouse in St Katherine Docks. It’s almost tempting to propose a ‘law’ that states: “The older a pub looks, the newer it probably is.”

Another coun­ter­feiting culprit is the Prospect of Whitby, in Shadwell (or Wapping, if you prefer), where antique fixtures and fittings have been imported from other sites in a (successful) bid to enhance its tourist appeal. But let’s not be too harsh on the Prospect. Most of the present pub was built around 1800 but parts of it – certainly including its stone floor – may date from as early as 1520. If more of the original structure had survived intact it would be the oldest pub in London, by Hidden London’s reckoning.

Several 20th-century pubs in the Holborn area are styled to look much older than they are, though not neces­sarily with an intent to deceive. The Cittie of Yorke and the Ship Tavern, for example, were both rebuilt in the early 1920s and endowed with ‘antiqui­fied’ interiors.


The biggest liars are the estab­lish­ments that don’t even stand on the same sites as their ancient namesakes. Admirable though it is as a pub, the Cittie of Yorke has to own up to that sin, as does Clerkenwell’s Holy Tavern, a 1990s creation (as the Jerusalem Tavern) in a 1720s building with an 1820s wooden shopfront. It’s not the case with the Ship Tavern – despite what it says on Wikipedia – but it most certainly is with the White Hart on Drury Lane, which outra­geously professes to have been founded in 1216. The Londonist says: “It’s a dubious claim. The building is only 100 years old, and built on a different plot to the original White Hart. But we like the sentiment.” That last sentence must surely be tongue in cheek.

When in doubt about the true antiquity of a pub’s premises, one of the best places to check is Historic England’s register of listed buildings. In the case of an older building, you can usually find out roughly when it was built – and how much it’s since been altered – by searching the register (or zooming in on the map, to get round some of the indexing flaws in the search system) and reading the list entry. But surpris­ingly often you’ll discover that some allegedly ancient tavern isn’t listed at all, meaning the building is almost certainly less than 170 years old – and not of much archi­tec­tural merit either. Hammer­smith’s Blue Anchor – ‘Estab­lished 1722’ – is an unlisted case in point, though the nearby Dove really is of early to mid-18th century origin, and grade II listed.

Covent Garden’s Nell of Old Drury – a suppos­edly “17th century pub” – is another unlisted example, because its history doesn’t go back before 1835 and it was completely rebuilt in 1883. As for the secret tunnel between the pub and the Theatre Royal, reputedly used by Charles II to visit Nell, it’s so secret that no one has ever seen it.

Soho’s Shakespeare’s Head is also unlisted by Historic England, despite “dating back to 1735” and having “genuine connec­tions to the Bard,” according to its web page. The pub was rebuilt in 1927 – and the claimed link with William Shake­speare is terribly tenuous.

Rotherhithe’s Mayflower – ‘Estab­lished 1550’ – is an even more notable omission from the Historic England list. There’s an online review of this quaint-looking place that says “you can tell it’s really old from the leaded glass windows” (which are shown in the photo at the top of this article). But it’s nearly all fakery from the mid-1950s and later – making it “alas only a picturesque pastiche” [Pevsner]. To be fair, the building was hit by a Luftwaffe bomb so there was an under­stand­able need for post-war recon­struc­tion – but the Spread Eagle (as the pub was then called) had already been rebuilt early in the 19th century.

So what is the oldest public house in London? Which estab­lish­ment was built longest ago and hasn’t since been entirely (or almost entirely) rebuilt? After lengthy delib­er­a­tion and hesi­ta­tion, Hidden London has accepted the verdict handed down by Dr John Hawkins, which was published on a plain and simple Google Sites page in 2010. Under a set of ratio­nally formu­lated rules, and based on some solid (though not exhaus­tive) research, he declares London’s oldest pub to be the Seven Stars, on Carey Street. 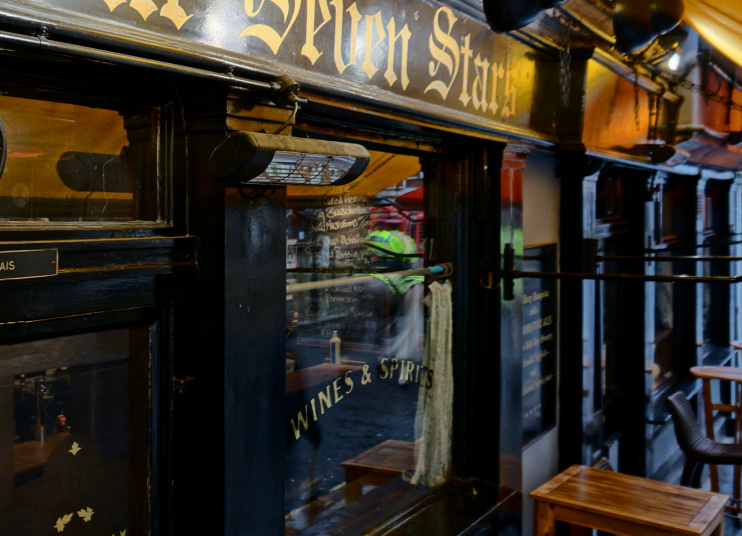 The Seven Stars is the winner by some margin too – as the table below shows. Here’s some history from its website:

“The Seven Stars pub was built in 1602 and in all like­li­hood was built specif­i­cally as an alehouse (the evidence has some patches to contend with). Taverns were usually called the Seven Stars to attract Dutch sailors, which referred to the Seven United Provinces of the Nether­lands. The area surrounding Carey Street, bounded by the River Fleet to the east and Thames to the south, was popular with Dutch settlers in London – so it appears late-Renais­sance marketing was at work here. Prior to its embank­ment, the Thames was broader (and therefore closer to the Seven Stars) and industry was very much marine based.

“The pub was called ‘The Leg and Seven Stars’ for many years [Hidden London note: probably corrupted from ‘League of/and Seven Stars’], and although an unbroken run of records dating back its entire 400 year history does not exist, infor­ma­tion about every business and service in the area is also incom­plete. The Great Fire of London fizzled out before reaching Temple Bar, sparing this original pub, but the unseen cost to London of the fire was the wide­spread destruc­tion of parish records.”

It’s not clear exactly when ‘The Leg and Seven Stars’ became simply ‘The Seven Stars’ but John Diprose, writing in 1868 [in Some Account of the Parish of St Clement Danes], says: “The Seven Stars we fear has been denuded by some vulgar person of its leg or league.”

In case you’d like to double-check the build­ing’s bona fides, here’s a link to the Seven Stars’ Historic England list entry. Yes, it contains a few caveats, and details of 19th century remod­el­ling, but you’re unlikely to find a list entry for any other London pub that admits to the distinct possi­bility of it being as intrin­si­cally and substan­tially old as this one.

It’s only right to mention that Brandwood and Jeph­cote’s London Heritage Pubs (CAMRA, 2008) asserts that “the building itself probably dates only from the 1680s.” No supporting evidence is offered for this claim but if it were true the Seven Stars would drop several places down the top 10, below.

Either way, if you’re looking for an arche­typal Olde English hostelry interior, you won’t find that at the Seven Stars. Perhaps that’s why it didn’t feature in the London­ist’s Best Old London Pubs poll. But if you want a char­ac­terful little pub that really could be as old as you can get in London, Hidden London recom­mends the Seven Stars highly, though it gets a bit crowded with local lawyers at peak times on weekdays.

Based on John Hawkins’ list but with several revisions

* The building’s carcase appears to date from the early 18th century, though it was not verifiably recorded as licensed premises until 1772 (see Hidden London’s Guide page on the Lamb and Flag).

The top 10 excludes the Olde Wine Shades in Martin Lane, EC4, firstly because it’s a wine bar, not a pub, and secondly because the building doesn’t seem to have been home to a bar of any kind until around 1830. That was when the Shades moved here from its location beneath the terrace of Fishmongers’ Hall, where it had been established in 1697. The change of address was necessitated by the hall’s demolition prior to the reconstruction of nearby London Bridge. The Martin Lane building began its existence as a merchant’s house before the end of the 17th century, possibly as early as 1663.

See also Time Out’s fine article on London’s oldest pub – though it has a few errors, such as failing to note that most of Hampstead’s Old Bull and Bush is a 1920s rebuild. Still, there’s probably an error or two in the article above, too.