The Blue Anchor is a white­washed riverside pub on Lower Mall, decked out with nautical and rowing memo­ra­bilia and graced by a pewter-topped bar. The estab­lish­ment was granted its first licence (as the Blew Anchor) in 1722, though it may have already been in existence for some time before that date. A sheep was roasted whole on the ice opposite the Blue Anchor when the Thames froze over in 1789.

It’s claimed that Gustav Holst, who taught music in nearby Brook Green, wrote his Hammer­smith Suite at the pub, but there’s no partic­ular evidence for this – espe­cially as there’s no such compo­si­tion.

More veri­fi­ably, George Cole and Dennis Waterman – playing Arthur Daley and Terry McCann – sat outside the Blue Anchor in the end credits of Minder. And in the 1998 parallel lives rom-com Sliding Doors blonde Gwyneth Paltrow enjoyed a drink here with John Hannah while her brunette alter ego passed by.

Despite the antiquity of its name, the pub has been rebuilt too radically to justify desig­na­tion as a listed building – or even as a ‘building of merit’ – unlike most of its neigh­bours. The owners of “one of the oldest pubs in London” could knock it down tomorrow and Hammer­smith & Fulham council wouldn’t bat an eyelid. 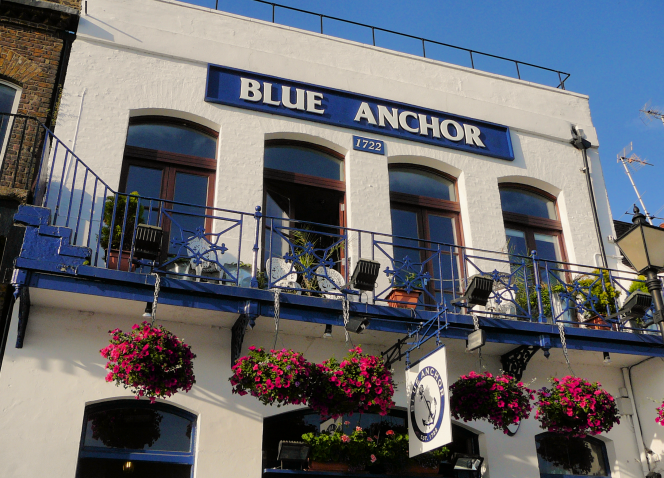