A nickname applied to the south-western corner of Clerkenwell because of its strong Italian connections, which go back at least two centuries 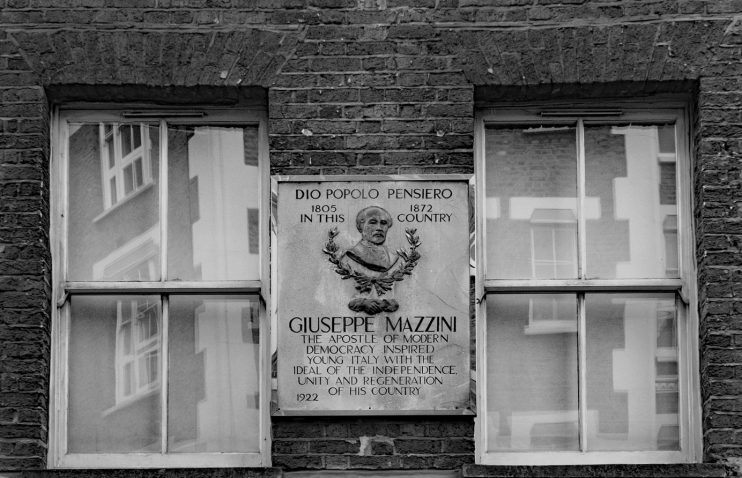 Also once known as Italian Hill or the Italian Quarter, Little Italy’s bound­aries have histor­i­cally been recog­nised as Clerken­well Road, Farringdon Road and Rosebery Avenue.

Over the course of the 19th century the Saffron Hill area – as it was earlier known – gained a growing popu­la­tion of working-class Italians. The author­i­ties were glad to see these indus­trious immi­grants progres­sively supplanting the pick­pockets and fences who had made the area notorious and were vividly portrayed by Dickens in Oliver Twist (1837–8).

St Peter’s church was conceived in 1845 by St Vincent Pallotti, a Roman Catholic priest and founder of the Pallot­tines, the Society of the Catholic Apos­to­late. The Irish architect Sir John Miller-Bryson modelled the church on the Basilica of San Crisogono in Rome’s Traste­vere district. It was conse­crated as the church of St Peter of all Nations in 1863 and is now a grade II* listed building.

The Italian consul published a report in 1895 esti­mating that his coun­trymen in London numbered around 12,000, with southern Italians tradi­tion­ally making their home in Little Italy while those from farther north were estab­lishing a newer base in Soho.

The Soho contin­gent consisted of tailors, watch­makers, artists, domestic servants and those working in what would nowadays be called the hospi­tality industry. In Little Italy the principal occu­pa­tions were all of an itinerant variety: “organ men, ice vendors, ambulant merchants, plaster bust sellers, models for artists, etc.”

The plaster bust trade features in the Sherlock Holmes adventure ‘The Six Napoleons’, in which the villain is of Italian origin and Inspector Lestrade calls upon the help of a colleague who has made a speciality of “Saffron Hill and the Italian Quarter”. While some observers looked down on the Neapoli­tans and Calabrians of Little Italy – and Conan Doyle certainly depicted a few of them in a poor light – most acknowl­edged that they were generally striving to make an honest living.

The concen­tra­tion of Italians in this area reached a peak around the time of the consul’s report and during the 20th century the community spread itself more thinly throughout the capital.

Still, at the time of the 2011 census, almost 5 per cent of Little Italy’s residents were actually born in Italy, compared with just 0.75 per cent in London as a whole. (The census didn’t attempt to count how many British-born residents are of Italian descent.)

Sunday worship at St Peter’s has continued to provide a focal gathering point for Italians in London, espe­cially at Christmas, Epiphany and Easter.

The proces­sion of Our Lady of Mount Carmel – held on the Sunday after 16 July – is Little Italy’s most important event. Except during wartime it has taken place annually since at least 1896. According to the church’s historian, “it appears to have been the first outdoor Roman Catholic mani­fes­ta­tion of faith [in England] since the time of Henry VIII’s Refor­ma­tion” – and Queen Victoria is said to have granted special permis­sion to the local police chief in Holborn for the parade to take place.

Decorated floats began to feature during the 1950s and thousands of people line the streets around St Peter’s to watch the proces­sion every year. Nowadays there are stalls selling Italian deli­ca­cies too.

To the west of the church there’s a handful of Italian eateries, including Casa Italiana San Vincenzo Pallotti and Terroni of Clerken­well. Farther west, next to an Italian pizzeria, the Holborn School of Motoring (Scuola Guida) offers driving lessons in Italian. Or you can buy a Vespa at Scootech, 73 Clerken­well Road.

Giuseppe Mazzini, the writer, patriot and revolutionary, lived in Laystall Street and founded an Italian language school in nearby Hatton Garden in 1841.

* Output area codes E00004520, E00004536, E00004539, E00004542 (all in Camden’s Holborn and Covent Garden ward) and E00013546 (in Islington’s Clerkenwell ward). Other output areas covering small parts of Little Italy are excluded because they also cover too much that is not Little Italy.
The picture of the Mazzini commemorative plaque, at the top of this page is cropped from an original photograph, copyright Julian Osley, at Geograph Britain and Ireland, made available under the Attribution-ShareAlike 2.0 Generic Licence. Any subsequent reuse is hereby freely permitted under the terms of that licence.