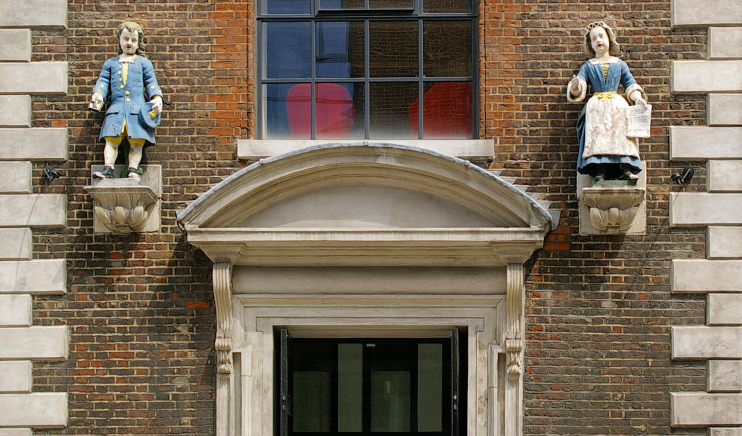 Hatton Garden takes its name from Sir Christo­pher Hatton, who acquired the land here from the bishops of Ely in the 1570s. Hatton was both knighted and made chan­cellor by Elizabeth I, who had orig­i­nally been attracted to him by his graceful dancing at a ball. Accord­ingly nicknamed ‘the dancing chan­cellor’, he was a major sponsor of Francis Drake’s round-the-world voyage. Drake renamed his flagship in honour of his patron, whose family crest featured a golden hind.

Prompted by a shortage of funds and the rapid growth of London’s popu­la­tion, the Hatton family began to build houses on their Ely estate from the 1660s. The first prop­er­ties lined what was then Hatton Street, now Hatton Garden, and then filled a grid spreading out from there.

Following the comple­tion of the estate, a church was built at 43 Hatton Garden. Not long after­wards it was taken over by a charity school – hence the figures of a boy and girl in the photo­graph above.*

With the death of the last direct Hatton descen­dant in 1760, the estate was sold off and new houses were built, mostly for pros­perous merchants. For another century Hatton Garden retained a favourable repu­ta­tion as a place of residence, while neigh­bouring streets dete­ri­o­rated to become the crim­i­nalised slums depicted in Oliver Twist.

To the immediate north of Hatton Garden, London’s Little Italy took root in the mid-19th century. Giuseppe Mazzini, the writer and nation­alist, founded an Italian language school in Hatton Garden in 1841. The instru­ment makers Negretti and Zambra set up shop in 1850 and the company remained here for 100 years.

The author­i­ties built new roads and widened others throughout the neigh­bouring area in the 1850s and 60s, partly to remedy problems of traffic conges­tion but also try to clear the area of its under­class. During this period Hatton Garden was trans­formed into a commer­cial locality, with all kinds of busi­nesses taking over its houses. Clerken­well had long been a centre for jewellery craftsmen and watch and clock makers and these trades began to spread into Hatton Garden at this time.

Soon after­wards, the street became a cutting centre for Indian diamonds and then added a trade in gold and platinum. The exploita­tion of South Africa’s Kimberley diamond field brought a further boost from the 1870s. The diamond business peaked in 1885, when 67 precious stone mechants were recorded in Hatton Garden and its adjacent streets.

Two specialist banks managed the merchants’ accounts and stored their precious metals and gems, and the Diamond Club acted as a jewel trading centre and stock exchange.

At that time – and on into the first half of the 20th century – Hatton Garden’s merchants and workshops marketed their wares only to the trade. Precious stones were a Jewish speciality and it was not uncommon to see rough diamonds being sold in the local kosher restaurants.

The bombs of the Blitz – and the arrogance of postwar devel­opers – resulted in the loss of most of the local­i­ty’s remaining Georgian houses. The Hatton church was gutted by a bomb and restored as offices.

Laurence Graff claims to have opened Hatton Garden’s first retail jewellers in 1962 – though Hidden London is not convinced that it had no antecedents. Certainly, some trade dealers had previ­ously been willing to sell to members of the public when asked nicely. Either way, many more retailers soon followed, some selling locally-made wares while others obtained their merchan­dise from farther afield or bought and sold second-hand jewellery.

In recent years the number of workshops has dwindled, though several still flourish here. The retail jewellery trade is more active than ever and the locality now boasts at least fifty diamond merchants, jewellers and repairers, inter­mixed with offices and cafés.

In 1993 thieves stole jewels valued at £7 million from Graff’s workshop in Hatton Garden. At the time, it was London’s biggest gem robbery of the modern era.

Over the Easter weekend in April 2015 thieves broke into the vault at Hatton Garden Safe Deposit, drilling through a concrete wall before ransacking boxes containing cash, jewels and other valuables. All members of the gang were subse­quently appre­hended and convicted.

* The picture of bluecoated charity children, Hatton Garden, at the top of this page is adapted from an original photograph, copyright Julian Osley, at Geograph Britain and Ireland, made available under the Attribution-ShareAlike 2.0 Generic Licence. Any subsequent reuse is hereby freely permitted under the terms of that licence.