The Golden Hind (or Hinde) was the ship in which Francis Drake made his voyage of circum­nav­i­ga­tion in 1577–80. Orig­i­nally called the Pelican, it was renamed the Golden Hind at Port St Julian, near the entrance to the Straits of Magellan, in 1578. The change of name honoured Drake’s sponsor, Sir Christo­pher Hatton (of Hatton Garden fame), whose family crest featured a golden hind (a female red deer).

Drake claimed a portion of present-day Cali­fornia for Elizabeth I and he was knighted by the Queen on 4 April 1581, after she had dined aboard the Golden Hind at Deptford.

A replica of the galleon has been berthed at St Mary Overie Dock since 1996. The dock takes its name from the priory church of St Mary Overie or Overy, renamed St Saviour’s in 1540 and which became Southwark Cathedral in 1905. It is said in legend to have been founded by a ferryman’s daughter called Mary Overs. Her miserly father, Awdrey, feigned death in the hope that sorrow would restrain his household’s consump­tion of victuals. Instead they rejoiced and made merry, whereupon Awdrey rose up in anger, only to be slain as a ghost. Mary, now possessed of his fortune, sent for her lover, but he was thrown from his horse and was killed. In sorrow she founded the nunnery, which she entered. 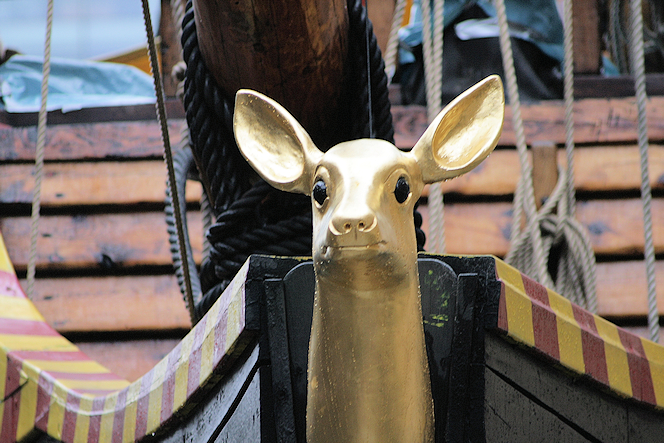