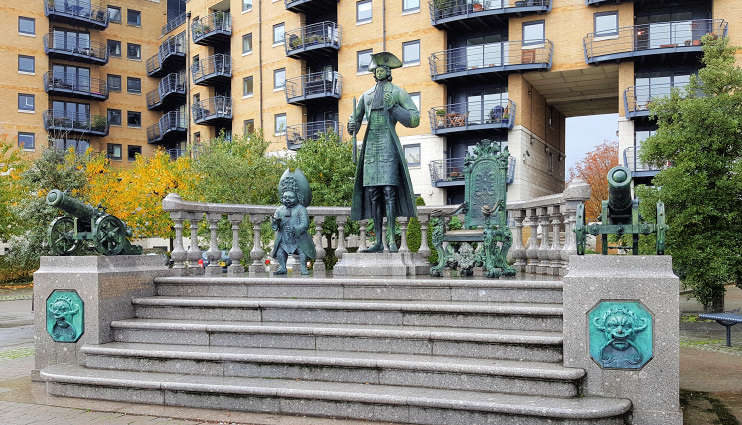 Dept­ford’s existence was first mentioned in 1293 – when it was called Depeford. The ‘deep ford’ crossed what is now Deptford Creek, at the mouth of the River Ravensbourne.

Henry VIII founded a naval dockyard here in 1513 and within a century Deptford had become one of the country’s leading ports and a major indus­trial suburb. In The Spirit of London’s River, LM Bates says of Deptford water­front: “This was the ground from which, more than any other, grew the British Empire.”

Several of the greatest figures of 16th- and 17th-century English history had asso­ci­a­tions with Deptford. In 1577 Francis Drake sailed from Deptford via Plymouth for a three-year circum­nav­i­ga­tion of the globe, claiming a portion of present-day Cali­fornia for Elizabeth I . On his return, Drake was knighted by the Queen after she had dined aboard the Golden Hind at Deptford.

In 1593 the dramatist Christo­pher Marlowe was killed here, reputedly in a tavern brawl. Anthony Burgess’s A Dead Man In Deptford is among the works to suggest a conspir­a­to­rial aspect to the affair.

The diarist John Evelyn came to Deptford in 1652 to live at Sayes Court – a house belonging to his wife’s family – which he rented to Peter the Great of Russia when he visited London in 1698 to study the art of ship­building. The photo­graph above shows a statue of Peter (and a court dwarf) by the sculptor Mihail Chemiakin and architect Viach­eslav Bukhaev, erected in 1999 outside the then newly built Greenfell Mansions, part of the Millen­nium Quay devel­op­ment that occupies the former site of Deptford power station.

John Evelyn discov­ered wood­carver and sculptor Grinling Gibbons toiling in a lowly Deptford workshop and intro­duced him to Christo­pher Wren. Gibbons went on to become a master carver under five British sover­eigns. Another illus­trious diarist, Samuel Pepys, worked in Deptford as an admiralty official.

The south­ern­most part of the district was laid out from 1805 and soon became known as Deptford New Town. St John’s church was built here in 1855 and has since endowed that locality with its name.

Deptford dockyard closed in 1869 and was replaced by a cattle market that closed in 1913. Through Second World War bombing and postwar indus­trial decline, Deptford suffered a long and damaging period of dete­ri­o­ra­tion but over the past quarter-century it has been the focus of extensive regen­er­a­tive building – both commer­cial and resi­den­tial – espe­cially along the Thames water­front and around Deptford Bridge in the south. Trinity Laban’s faculty of dance opened at Deptford Creekside in 2002 and has since been engulfed by a “vibrant creative community” called Creekside Village.

Deptford High Street still has terraced buildings from the late 17th century and the 18th century and – although they are sometimes hard to spot amongst all the newer intru­sions – they represent an under­valued part of London’s archi­tec­tural heritage. 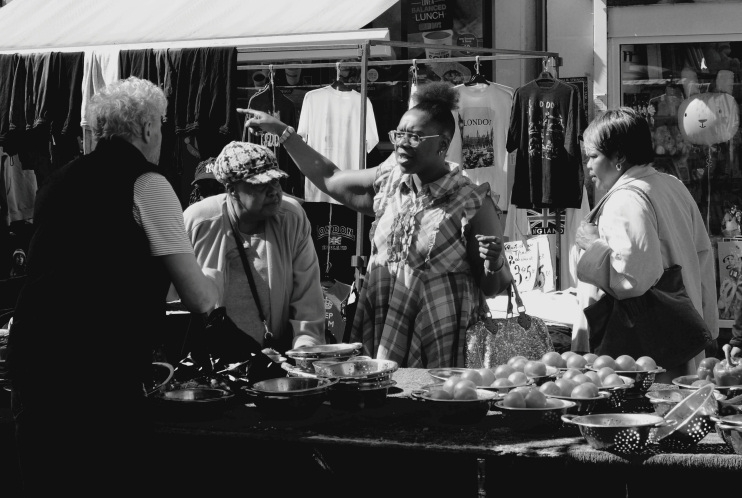 Deptford has a large black community, mostly of African origin. (The photo above shows a scene in Deptford Market in 2017.) With few pensioners and many children, the average resident of Evelyn ward is aged only 30.7 – compared with 38.6 for the whole of England and Wales. Under a fifth of homes are owner-occupied and 15 per cent are lone parent households.

The rock band Dire Straits was founded in Deptford in 1977.

* The picture of the statue of Peter the Great at the top of this page is adapted from an original photograph, copyright Independently London, and the picture of Deptford Market is minimally modified from an original photograph, copyright Sam, both at Flickr, made available under the Attribution 2.0 Generic licence. Any subsequent reuse is freely permitted under the terms of that licence.