Bleeding Heart Yard is a cul-de-sac leading off Greville Street, near Hatton Garden. The yard’s name has no connec­tion with the flowering plants known as bleeding hearts and instead probably derives from an old inn sign, the Bleeding Heart of Our Lady, which depicted the heart of the Virgin Mary pierced through by swords. However, the sanguinary imagery has inspired several colourful legends, which Charles Dickens summarises in Little Dorrit (1855–7) – where he also suggests that the name actually relates to “the heraldic cogni­sance of the old family to whom the property had once belonged.”

The goriest fable suggests that sometime in the early 17th century the much-wooed Elizabeth Hatton was murdered here by the Spanish ambas­sador – whom she had jilted – and was found at dawn with her heart still pumping blood onto the cobble­stones. Another angle on this story, this time featuring Sir Christo­pher and Lady Alice Hatton and the Devil, was set to verse by Richard Barham in his Ingoldsby Legends.

“Of poor Lady Hatton, it’s needless to say,
No traces have ever been found to this day,
Or the terrible dancer who whisk’d her away;
But out in the court-yard – and just in that part
Where the pump stands – lay bleeding a large human heart …” 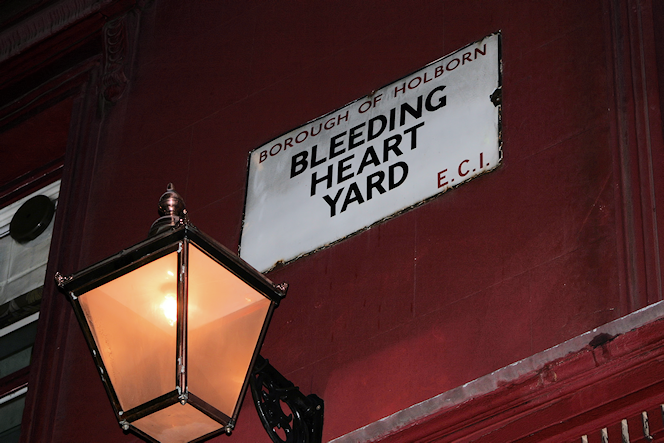