Arguably London’s most vibrant place, a zone of continuous commotion and long-time centre of alternative culture – though it’s less edgy than it used to be 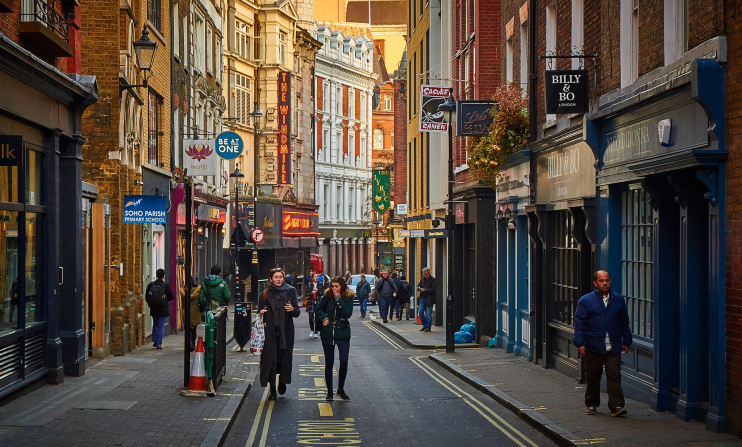 This compact commer­cial and resi­den­tial quarter is bounded on the west, north and east by Regent Street, Oxford Street and Charing Cross Road. In the south, Chinatown forms a less well-defined border.

Soho now encom­passes the entire area once known as Kemps­field, of which it was orig­i­nally just a part. Its name probably derives from a cry similar to ‘tally-ho’, for this was a hunting ground in the 16th century.

Built up after 1679 by the spec­u­la­tive builder Richard Frith, Soho at first attracted aris­to­crats but soon provided a haven for Greek Chris­tians and Huguenots fleeing religious perse­cu­tion. The House of St Barnabas was estab­lished on Greek Street in 1846 as a refuge for vagrant women. It’s now a non-resi­den­tial charity supporting the homeless.

German, Italian and Hungarian radicals came to Soho after the failed revo­lu­tions of 1848. Some of these migrants opened restau­rants special­ising in their national cuisine, attracting London’s bohemian community from the early part of the 20th century and espe­cially in the 1930s and 1940s.

From the 1930s the Windmill Theatre staged nude tableaux as part of its vaude­ville shows and boasted that it never closed throughout the Second World War.

After the war Soho became notorious as the West End’s red-light district. Legisla­tive changes subse­quently pushed pros­ti­tu­tion off the street corners and into dingy upstairs flats, many of which are now giving way to upmarket resi­den­tial rebuilds. Strip clubs, peep shows and other sex-related enter­prises are also much reduced in number.

In 1959 the tenor saxo­phonist Ronnie Scott founded a jazz club on Gerrard Street, which moved to its present site at 47 Frith Street in 1965. On Old Compton Street, the basement of the long-lost 2i’s coffee bar was an incubator of British rock­’n’roll. On Soho’s western side, Carnaby Street gained worldwide fame in the 1960s as the heart of ‘swinging London’. Since the late 1980s, gay Soho has been focused on Old Compton Street.

Soho is home to adver­tising, media and film distri­b­u­tion companies (histor­i­cally centred on Wardour Street) and is famed for its pubs and clubs, a declining number of which are colour­fully seedy. The district is also awash with restau­rants and cafés of every category and cuisine. 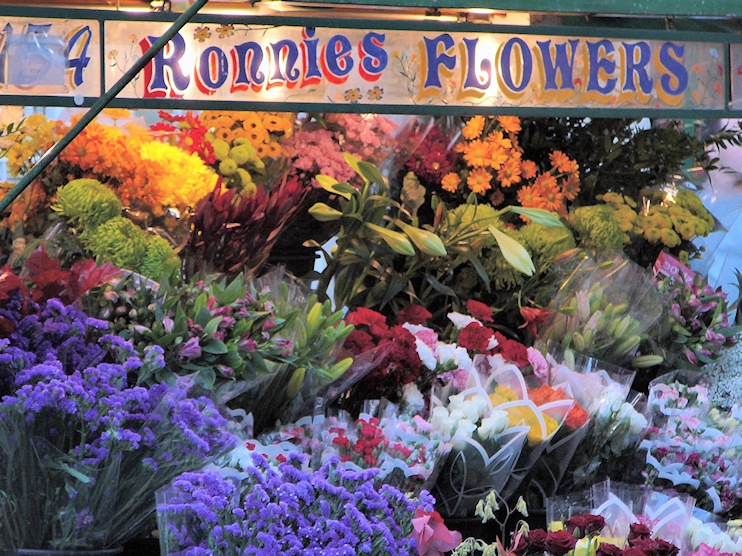 Berwick Street has a tradi­tional outdoor market. Its stalls include Ronnie’s Flowers, shown in the photo above, a family business that’s been here since 1964.

The council’s attempt to pedes­tri­anise much of Soho in 1999 was abandoned after just six months and its streets returned to their normal traffic-clogged state, nowadays augmented by cycle rickshaws.

St Anne’s church­yard, Golden Square and Soho Square have the only green spaces, the latter graced by a 17th-century statue of Charles II and a charming gardeners’ shed of Victorian origin that pretends to be even older. The perimeter of Soho Square has a French Protes­tant church and St Patrick’s RC church, while Soho Street has a Radha Krishna temple and Govinda’s vege­tarian restaurant.

Soho’s famous former residents are so numerous that there’s space here only to mention a tiny selection: Canaletto, Casanova, Blake, Constable and Marx.

Wikipedia’s list of songs about London includes more than 60 recordings with ‘Soho’ in their title, making it second only to ‘Piccadilly’ in titular frequency. Hidden London particularly likes Phil Lynott’s ‘Solo in Soho’ (1980).

* The picture of Great Windmill Street at the top of this page is reformatted from an original photograph, copyright Pedro Szekely, at Flickr, made available under the Attribution-ShareAlike 2.0 Generic Licence. Any subsequent reuse is freely permitted under the terms of that licence.