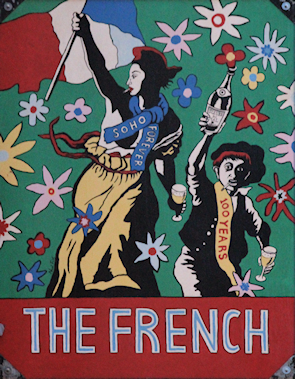 The French House is a pub on Dean Street in Soho. Previ­ously called the York Minster, it was run by Victor and then Gaston Berlemont, father and son, from 1914 to 1989, and was popularly known as ‘the French’, although the Berlemonts were Belgian. One source says that the pub was already known as ‘the French’ before Victor Berlemont arrived, on account of its emigré clientèle.

Countless legends have built up around this pub, to the extent that it’s often impos­sible to separate fact from fiction.

The estab­lish­ment defi­nitely had a German landlord called Christian Schmitt from 1891 but he wasn’t interned or deported when the First World War broke out, as some say. By that time he had died, and it was his widow who sold the pub to Victor Berlemont in 1914.

Contrary to an oft-repeated tale, it was not Victor Berlemont who changed the pub’s name from ‘Schmitt’s’ to the patriotic ‘York Minster’. Schmitt did use his name as a secondary iden­ti­fi­ca­tion for the estab­lish­ment, and Berlemont obviously dropped that, but it seems to have been called the York Minster since at least 1828 – which of course would mean that the pub wasn’t first estab­lished in the 1890s, as has been claimed. There are alter­na­tive claims that its history dates back as far as the 16th century but Hidden London hasn’t seen any evidence for this.

The place was rebuilt in 1936–7 but it certainly wasn’t burnt down and rebuilt again in 1984, as at least one reputable website suggests. It was the other York Minster that suffered a serious fire that year, an event that (contrary to what it says on Wikipedia) had nothing to do with the pub’s renaming from the York Minster to the French House, which in fact happened in 1981.

Before the name change, were the two York Minsters frequently confused in matters such as donations intended for the cathedral and deliv­eries of claret meant for the pub? Maybe (just maybe) it happened once.

During the Second World War the York Minster did become a meeting place for members of the Free French movement, but it’s highly unlikely that General de Gaulle wrote his ‘à tous les Français’ decla­ra­tion in the upstairs restaurant.

When Brad Pitt and Marion Cotil­lard’s char­ac­ters got married in the Second World War film ‘Allied’ (2016), they cele­brated in the French House, according to IMDb. But did wide-angle lenses really manage to make the pub look quite so big, or were the scenes shot on a studio set that had been modelled on the French House? Hidden London does not know.

In its heyday ‘the French’ attracted writers and artists; drinkers here have included Brendan Behan, Stephen Spender, Dylan Thomas, Salvador Dali and Francis Bacon. But inevitably some porkies have been told about their deeds here. For example, Dylan Thomas is supposed to have left a draft of Under Milk Wood beneath a chair, neces­si­tating its later retrieval by a BBC producer – but Hidden London scep­ti­cally suspects this never happened.

The French does still boast a rela­tively bohemian clientele and encour­ages good conver­sa­tion with a ‘no music, no machines and no tele­vi­sion’ rule. But it’s impos­sible to prevent mobile phone usage these days, as some websites still suggest it does. Nor does it still insist on serving beer by the half pint. Pints have been available for a few years now.

In 2014 the pub hoisted a new sign (shown in the photo­graph at the top) to celebrate the 100th anniver­sary of Victor Berlemont’s arrival here. That much is true.