A handful of Chinese restau­rants were estab­lished in Soho during the Second World War, when they became popular with soldiers who had acquired a taste for the food abroad. Later, Chinese entre­pre­neurs began to buy up and convert the rundown prop­er­ties south of Shaftes­bury Avenue. This coincided with an influx of agri­cul­tural workers from Hong Kong, who had been forced out of their tradi­tional occu­pa­tions by changes in the world rice markets. Many found work in the catering trade, often living nearby in tied accom­mo­da­tion, and a variety of other busi­nesses sprang up to serve the new population.

Increasing pros­perity has allowed most members of the community to reside further afield but Chinatown’s role as a trading zone is stronger than ever, catering to the Chinese popu­la­tion from all over south-east England – as well as to curious tourists and hungry Londoners in general.

There are oriental arches at each end of Gerrard Street, the street signs are bilingual (as are the notices in the book­makers) and the telephone kiosks are miniature pagodas. West­min­ster council has pedes­tri­anised Gerrard Street and parts of Maccles­field Street and Newport Place.

Since 1973 the Chinese New Year has been cele­brated on the Sunday closest to the New Year with lion dances and other festiv­i­ties; the date of the New Year usually falls between mid-January and mid-February, varying because it depends on the phases of the moon. 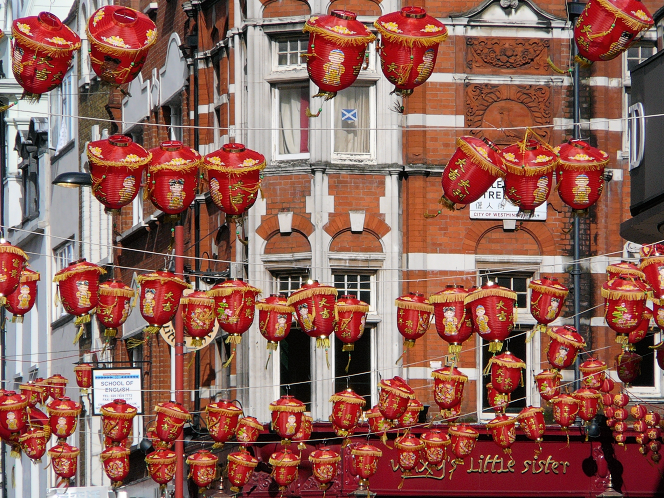