‘The quintessence of the West End’, according to Westminster council, Leicester Square is linked to Piccadilly Circus by Coventry Street 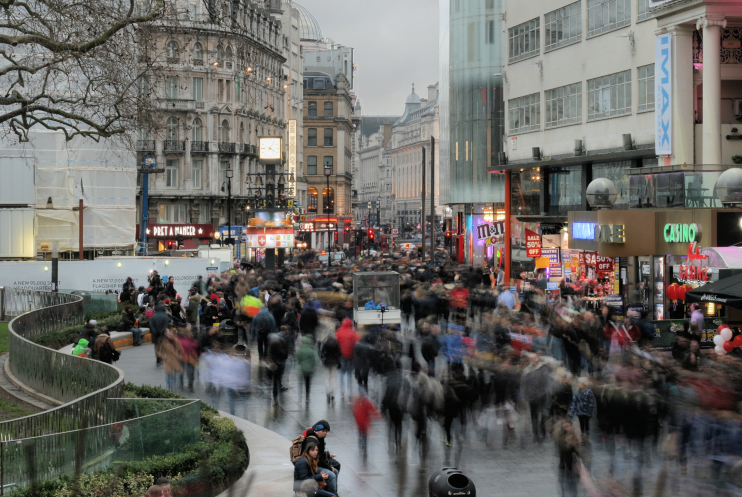 Orig­i­nally a square plot of Lammas land in the parish of St Martin’s, the area acquired the name Leicester Fields when Robert Sidney, second Earl of Leicester, built a residence here in 1636.

An early version of Leicester Square was laid out in 1665 and houses modelled on those in Pall Mall were built around it. From 1712 to 1760 Leicester House served as a palace for two princes of Wales and the square conse­quently became a fash­ion­able resort.

In 1771 Sir Ashton Lever converted Leicester House to a ‘museum of curiosi­ties’ called the Holo­phu­sicon, which attracted smaller crowds than the street enter­tainers and gambling dens that were present by this time. Lever also estab­lished an archery club that practised in the house’s grounds. He sold the house by lottery and it was demol­ished a few years later as part of a phase of rebuilding that brought traders and craftsmen to the square in place of private resi­dences and created roughly its present layout.

In 1782 Gedge’s drapers became the first London store to boast a large glass shopfront. A cheap theatre was built on the site of Leicester House, and this was later converted into another drapers shop and then a hotel. Also in the 1780s the pioneering anatomist and surgeon John Hunter assembled a collec­tion of specimens at his large house in Leicester Square, which he arranged into a teaching museum. The house’s contents were purchased by the govern­ment in 1799 and now form the nucleus of the collec­tion at the Hunterian Museum.

The middle of the square was used for exhi­bi­tions (notably in the form of the Great Globe) until gardens were laid out in 1874, with a central fountain and statue of Shake­speare and busts of notable former residents at each corner.

Theatres, oyster rooms and Turkish baths were by then appearing – and the square’s music halls included the Moorish-styled Alhambra (orig­i­nally the Royal Panop­ticon of Science and Art, a well-inten­tioned failure) and the Empire, which was built in 1884 and rebuilt in 1928 as a cinema, which was acquired by the Cineworld Group in 2016. The Empire’s entrance is visible on the right of the photo­graph above.

A few Georgian and Victorian buildings survive but most of the square now dates from the 1920s onwards. The Odeon Leicester Square was built in 1937 on the site of the Alhambra and adjoining Turkish baths. The cinema underwent a major refur­bish­ment in 2018. The whole Leicester Square area was pedes­tri­anised in the 1980s.

On the west side of the square a £200m mixed use devel­op­ment trans­formed Commu­ni­ca­tions House in 2016, whereupon the building was rebranded as LSQ London. It’s shown in the devel­opers’ CGI below, behind what has become known as the ‘Shake­speare fountain’. 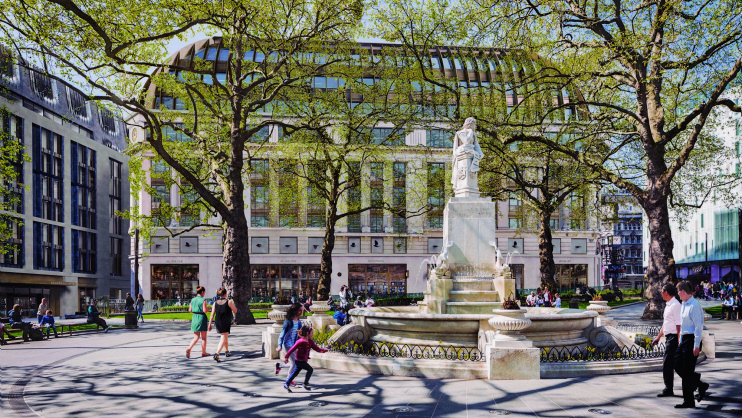 On the south side of the gardens, the Society of London Theatre’s reduced price ticket kiosk has become a minor insti­tu­tion. The head­quar­ters of Global Radio and its Capital FM subsidiary are on the east side of the square.

Night­clubs, casinos, bars, restau­rants and fast-food joints abound in all direc­tions, and the square’s swirling tide of humanity is a magnet for buskers, flyer distrib­u­tors and itinerant preachers.

Leicester Square Gardens are given frequent facelifts, including one in 1990 (which followed the construc­tion of a subter­ranean elec­tricity station that supplies much of the West End’s power), another before the 2012 Olympics and yet another in 2016. The gardens never look as good as one might hope, but it’s a challenge to beautify a pocket park that has to endure such heavy footfall – as well as regularly being converted into the site of a funfair or other special event.