Known as the Father of Scien­tific Surgery, John Hunter (1728–93) was a brilliant but tempera­mental anatomist and surgeon who sought to emphasize the rela­tion­ship between structure and function in the human body (and in the bodies of all kinds of living creatures), thus providing an analyt­ical basis for surgical practice. He died after suffering a fit during an argument at St George’s hospital, Hyde Park Corner (since relocated to Tooting), over the accep­tance of students for training.

During his lifetime Hunter assembled a vast collec­tion of instruc­tive specimens and prepa­ra­tions at his house in Leicester Square, which he arranged into a teaching museum. The house’s contents were purchased by the govern­ment in 1799 and given to the Company of Surgeons, now the Royal College of Surgeons, which has its head­quar­ters in Lincoln’s Inn Fields.

By the end of the 19th century the Hunterian Museum contained nearly 65,000 specimens covering anatomy and pathology, zoology, palaeon­tology, archae­ology and anthropology.

The college was bombed in 1941 but a large part of the collec­tion survived and the high­lights are today exhibited in a series of stylish galleries, revamped in 2004. They include human and animal anatomy and pathology specimens, wax teaching models, surgical and dental instru­ments, paintings, drawings and sculpture. 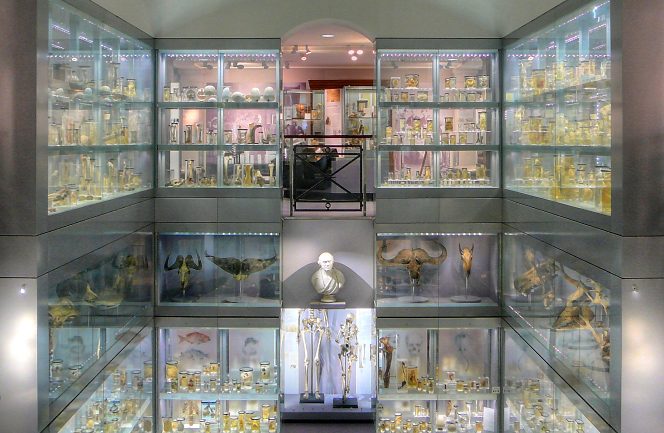