A traffic roundabout said to be ‘London’s most vital junction’ and its hotel-filled vicinity, located at the south-east corner of Hyde Park 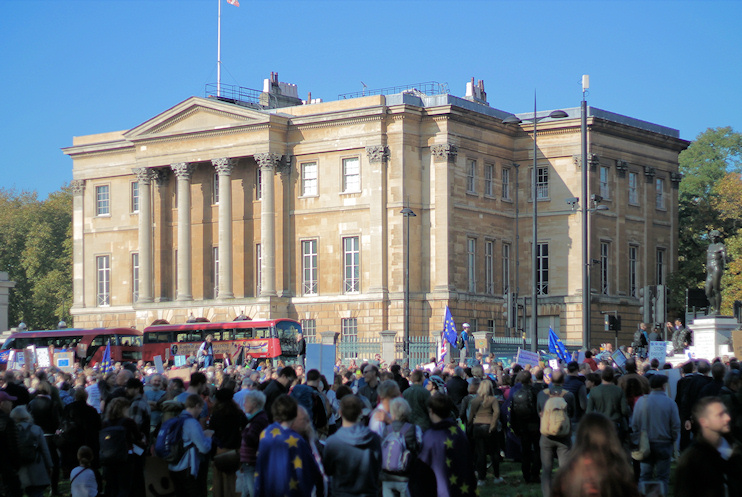 When Hyde Park first came into existence all the land here was part of it. Shown in the photo above, Apsley House was built by Robert Adam in 1778 for the Lord Chan­cellor, Lord Apsley, and became the home of the Duke of Wellington in 1817. The duke made signif­i­cant enhance­ments to the house’s grandeur and filled it with works of art that he had received as gifts.

Apsley House was known as ‘No.1 London’ because it was the first dwelling on the London side of the former Knights­bridge tollgate. It is now a popular museum and gallery, largely unchanged from the time of the duke’s residence.

Hyde Park Corner Lodge and St George Hospital (now the Lanes­bor­ough Hotel) both date from the 1820s. This decade also saw the real­i­sa­tion of a long-debated plan to create a grand feature at this important gateway to London. Decimus Burton’s neo-classical Consti­tu­tion Arch has been called ‘England’s answer to the Arc de Triomphe’, although it is somewhat smaller than its Parisian counterpart.

An oversized statue of the Iron Duke was later perched on the monument, which led to it becoming known as the Wellington Arch.

When the arch was disman­tled as part of a road-widening scheme and moved to its present position in 1882, Wellington’s statue was removed and taken to Aldershot. Its position atop the arch was taken in 1912 by Captain Adrian Jones’ bronze statue of Peace Descending on the Quadriga of War. The cost of the sculpture was met by Herbert Stern, 1st Baron Michelham, whose 11-year-old son Herman served as a model for the boy who pulls at the reins of the four horses harnessed to the quadriga as a huge figure of Peace descends upon them from heaven.

London’s smallest police station operated inside the Consti­tu­tion Arch for a few years but closed in 1960, when the former cross­roads at Hyde Park Corner became a round­about, marooning the arch in its centre. A unit of cavalry parades through the arch each morning.

Hyde Park Corner and its environs are graced by several military memorials, including the Royal Artillery Memorial, the Machine Gun Corps Memorial (also known as the Boy David Memorial) and the Australian War Memorial.

In 1952 the words ‘Hyde Park Corner’ were used as code within the royal household to communicate the death of George VI.