Once the ‘hub of the British Empire’ and now the focal point of the West End, located at the point where Mayfair, Soho and St James’s meet 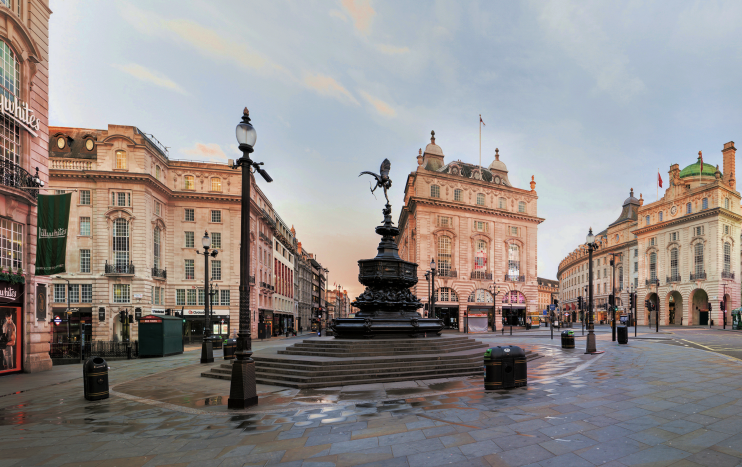 Regent Circus South, as it was first named, was created by John Nash in 1819 as a cross­roads on Regent Street. Piccadilly led south-westwards towards Hyde Park Corner and Coventry Street provided a short connec­tion with Leicester Square. There was no round­about but the buildings at the corners were given curved frontages. The Criterion Theatre opened in 1874.

The layout was disrupted in the late 1880s by the addition of Shaftes­bury Avenue on the north-east side, which forced the rebuilding of the London Pavilion music hall, now a shopping mall. Sir Alfred Gilbert’s statue of Eros was erected in 1893 to commem­o­rate the good deeds of Lord Shaftes­bury. It was the first public monument in the world to be made of aluminium. J Lyons and Co. estab­lished the Trocadero restau­rant, now a leisure centre, in 1896.

Piccadilly Circus station opened on the Bakerloo line in March 1906 and on the Piccadilly line in December of the same year. The station was rebuilt in 1928 to provide increased capacity. As the result of continual road alter­ations the circus has now become trian­gular in shape and Eros has been relocated.

Piccadilly Circus has been home to a succes­sion of famous stores, including Swan & Edgar and Lilly­whites, but is even better known for its illu­mi­nated bill­boards, espe­cially the 99-feet wide Coca-Cola sign. The tube station, pavements and road junction are among the busiest in London; there can be a traffic jam here at three in the morning.

Almost throughout its history Piccadilly Circus has served as a meeting place for various subcul­tures, including pros­ti­tutes and their clients, gay men – espe­cially before the decrim­i­nal­i­sa­tion of homo­sex­u­ality – and ‘drop-outs’ and drug dealers in the 1960s and 1970s. Nowadays its attrac­tions are more family-oriented.

* The picture of Piccadilly Circus at dawn at the top of this page is adapted from an original photograph by Benh LIEU SONG at Wikimedia Commons, made available under the Attribution-ShareAlike 4.0 International licence. Any subsequent reuse is hereby freely permitted under the terms of that licence.