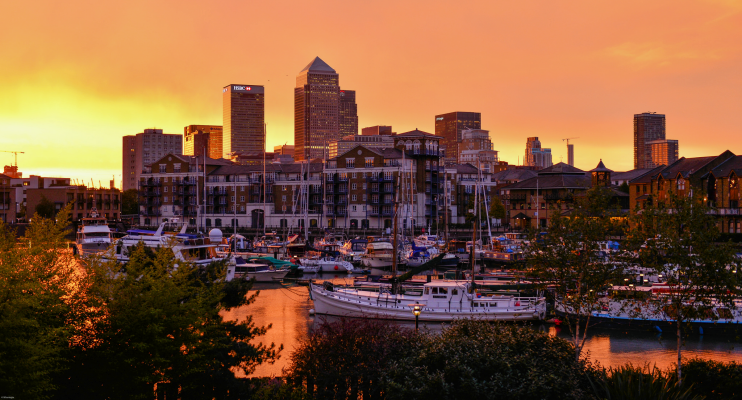 Limehouse takes its name from the limekilns that operated from the mid-14th century, converting Kentish chalk into quicklime for the capital’s building industry.

From the late 16th century ships were built at Limehouse and traders supplied provi­sions for voyages.

Wealthy merchants erected fine houses on Narrow Street, espe­cially in the early 18th century. In 1730 Nicholas Hawksmoor built St Anne’s church just south of Commer­cial Road. Regarded as one of the archi­tect’s finest works, it has the highest church clock in London.

In the 1740s a short-lived pottery produced England’s first soft-paste porcelain, which was known as Limehouse ware.

London’s oldest canal, the Limehouse Cut, was constructed around 1770 to link the River Lea at Bow with the Thames here, thus saving a journey around the Isle of Dogs.

With the growth of its docks, Limehouse acquired an immigrant popu­la­tion and became London’s first Chinatown. The Chinese community was never very large but it gained a repu­ta­tion for gambling and opium-smoking and Limehouse provided the backdrop for the Dr Fu Manchu films. Indeed, their creator claimed that the character was modelled on a Chinese man of unusual appear­ance whom he had glimpsed on Limehouse Causeway one foggy night in 1911.

Despite the 20th-century decline and closure of the London docks, the heart of old Limehouse survived the post-war municipal rede­vel­op­ment that trans­formed so much of the East End.

Narrow Street’s houses were some of the first in London to undergo gentri­fi­ca­tion from the late 1950s and disused ware­houses were converted to apart­ments in the 1970s and 1980s. Private devel­opers have since added new units, some of which were erected with excessive haste to capi­talise on the Docklands resi­den­tial boom.

The Limehouse Link burrowed beneath the locality in the early 1990s, connecting Canary Wharf with the Highway, which leads to the City of London.

In 1994 Half Moon young people’s theatre moved into the former offices of the Limehouse board of works on White Horse Road. To the west, at 490 Commer­cial Road, the former Troxy cinema hosts concerts, confer­ences and other events.

Although there are still a few Chinese restau­rants in Limehouse, people of Bangladeshi descent now form the largest ethnic minority, followed by white British. The 2011 census recorded only 3.6 per cent of residents of Chinese heritage here. This was an increase on the 2.7 per cent recorded in 2001 but was far lower than nearby Mill­wall’s 9.0 per cent.

In Jewish legend a golem (Yiddish, from Hebrew gōlem, ‘shapeless mass’) is a human figure formed from clay that can be super­nat­u­rally endowed with life. They were suppos­edly used as servants by rabbis. Peter Ackroyd rein­tro­duced the concept of the golem in his novel Dan Leno and the Limehouse Golem (1994), about a series of myste­rious murders in 19th-century east London.

In Britain in the early part of the 20th century, to limehouse meant ‘to use coarse abusive language, espe­cially in a political speech’. The usage arose from a notably acerbic speech that the Liberal politi­cian David Lloyd George made in Limehouse on 30 July 1909, in which he attacked the aris­toc­racy, financial magnates, etc.

‘Limehouse Blues’ is a song (1921) telling ‘a story of old Chinatown’, written by Philip Braham and Douglas Furber, made famous by Gertrude Lawrence and subse­quently performed by Rosemary Clooney and Julie Andrews. It is now much better known as an instru­mental and has been recorded in this form by Duke Ellington, Charlie Parker, Django Reinhardt and many others.

‘Limehouse Cut’ has been used as in the past as cockney rhyming slang for gut, usually with reference to the size of someone’s paunch. (For ‘guts’, plural, Newington Butts is preferred).

The Limehouse decla­ra­tion was a document setting out the founding prin­ci­ples of the Social Demo­c­ratic Party, which was estab­lished by the Labour Party moderates Roy Jenkins, David Owen, Bill Rodgers and Shirley Williams at Owen’s Narrow Street home in 1981. The SDP merged with the Liberal Party in 1988.

Limehouse Hole was an old name for the riverside district centred on present-day Westferry Circus, on the Isle of Dogs. From the 17th century it was a plying place for watermen and it later became densely filled with shipyards and other dock-related industries.

Limehouse Nights is a collec­tion of short stories (1916) by the prolific Poplar-bred author Thomas Burke (1886–1945). Set in London’s original Chinatown, Limehouse Nights caused contro­versy for its sympa­thetic portrayal of aspects of the East End under­world and was banned for immorality by the national subscrip­tion libraries. Burke produced several more collec­tions of Limehouse tales (and poetry), often featuring Quong Lee, an elderly Chinese character based on a man he had known in his childhood.

Limehouse Reach is the stretch of the River Thames opposite Limehouse, extending down the western side of the Isle of Dogs.

Lord Love-a-Duck of Limehouse was the title that Clement Attlee (1883–1967), Labour prime minister (1945–51), said he would take should he ever be elevated to the peerage. When Attlee resigned as Labour Party leader in 1955 he actually became 1st Earl Attlee of Waltham­stow, Viscount Prestwood.

* The picture entitled The great ‘fire’ of London at Canary Wharf [seen from Limehouse Basin] at the top of this page is reformatted from an original photograph at Flickr, copyright Winniepix, made available under the Attribution 2.0 Generic licence. Any subsequent reuse is hereby freely permitted under the terms of that licence.