The City with a capital ‘C’ always refers to the City of London, either in the literal geographical sense or as a figurative term for London’s financial centre 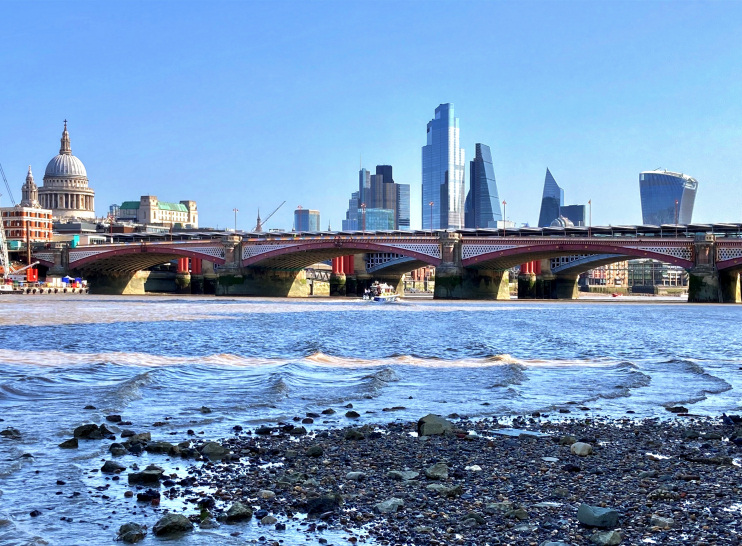 The City extends from Chancery Lane in the west to Mansell Street and Middlesex Street (Petticoat Lane) in the east. It is bounded by the Thames to the south and its jagged northern border reaches its farthest point just short of the western end of Old Street.

The Romans appear to have decided to make Londinium their capital soon after invading Britain in 43AD and built a defensive wall that encom­passed 330 acres on its comple­tion in the third century. With the departure of the Romans early in the fifth century, the Saxons estab­lished their main trading settle­ment in the vicinity of the Aldwych and the City fell into decline.

The construc­tion of the first St Paul’s Cathedral in 604 was the first sign of renewed growth and by the ninth century pros­perity had returned, with Cheapside becoming London’s high street.

Although the Normans made West­min­ster their seat of govern­ment, William the Conqueror built a castle that later became the Tower of London at the south-east corner of the City. (The Tower nowadays finds itself just outside the City of London boundary: it is in the London Borough of Tower Hamlets.)

Richard I allowed Londoners to choose their own mayor and the Guildhall was constructed in the early 15th century as a form of parlia­ment for repre­sen­ta­tives from the City’s merchant guilds.

The estab­lish­ment of the Royal Exchange in 1570 consol­i­dated London’s role as a leading inter­na­tional trading centre, but like most of the City’s buildings it burned down in the Great Fire of London in 1666. The medieval street plan was retained in the City’s recon­struc­tion, but brick and stone were used for the replace­ment buildings, rather than wood. Sir Christo­pher Wren was commis­sioned to rebuild the City’s churches, including St Paul’s Cathedral.

The Bank of England was founded in 1694 and evolved into the official custodian of the nation’s currency over the course of the following century. Other great financial insti­tu­tions also assumed their modern form during this period, including the insurance brokers Lloyd’s of London and the main clearing banks. The Mansion House, the official residence of the Lord Mayor of London, was completed in 1752.

Britain was rela­tively unaf­fected by the wars that blighted Europe for more than two decades from 1792, allowing London to assume an unri­valled position as the mercan­tile centre of a growing empire. However, with more than 100,000 inhab­i­tants crammed into the square mile, the vast majority of Londoners reaped scant reward from the City’s wealth and the reality of daily life was dark, dirty and noisome in the warrens of tenements in the poorer quarters.

A great change came with the building of the railways in the mid-19th century. Together with other improve­ments in transport and increas­ingly afford­able fares, the railways stim­u­lated a suburban building boom that allowed an exodus of residents.

The destruc­tion wreaked in the Second World War resulted in the clearance of the most of the surviving dwellings and workshops, although the subse­quent construc­tion of the Barbican brought the return of a resi­den­tial and cultural aspect.

From the late 1980s the regen­er­a­tion of Docklands posed the most serious threat to the City’s vitality since the Romans left. The Corpo­ra­tion of London reacted by relaxing some of its strict planning controls, improving streetscapes and embarking on a worldwide promo­tional drive. Despite the loss of some major corpo­ra­tions, construc­tion of new floor­space recovered – most visibly in the form of 30 St Mary Axe, better known as the Gherkin – and the City’s daytime popu­la­tion remains massive (at least in normal times); more than a quarter of a million people commuted here every day in 2019.

Boundary changes in 1994 increased the City’s area to 779 acres and added more than 30 per cent to its popu­la­tion – mainly from the Golden Lane and Mansell Street housing estates.

The City expe­ri­enced a surge in the creation of resi­den­tial units in the late 1990s, rising from almost none in 1994 to nearly 500 in 1999, split almost equally between new buildings and office-to-flat conver­sions. In the early years of the 21st century the craze faded, espe­cially for conver­sions. However, the construc­tion of office towers continued apace, inter­rupted only briefly by the financial crisis of 2007–8. The towers are mostly concen­trated along and around Bish­ops­gate. The tallest of these is the recently completed 22 Bish­ops­gate. Farther south (on the far right in the photo above), the 38-storey ‘Walkie-Talkie’ (20 Fenchurch Street) has a publicly acces­sible viewing area, the Sky Garden.

The City of London Corporation’s planning and transport committee has granted approval for yet another tower, a 73-storey skyscraper formally called 1 Under­shaft and nicknamed the Trellis, which will be second tallest building in western Europe after the Shard – if it gets built. Like the Walkie Talkie, it will include a free public viewing gallery.

Following the covid-19 pandemic, it seems almost certain that construc­tion of new skyscrapers will cease for a while, as devel­opers assess the conse­quences of the shift to working from home, which is likely to become permanent for a propor­tion of office workers, at least for two or three days a week. It’s possible that the City of London will never again be quite the same place as it was before 2020.

The City’s demo­graphic profile is radically different from that of any other local authority in London. Sixty per cent of residents are qualified to degree level or higher and a similar propor­tion of house­holds have only one occupant. The propor­tion of residents aged under 19 is less than half the national average.

* The picture of the City of London at the top of this page is adapted from an original photograph, copyright Matt Brown, at Flickr, made available under the Creative Commons Attribution 2.0 Generic licence. Any subsequent reuse is freely permitted under the terms of that licence.