Originally a defensive structure atop the City walls (pulled down in 1267), then a street and now a housing estate in the north-west corner of the City 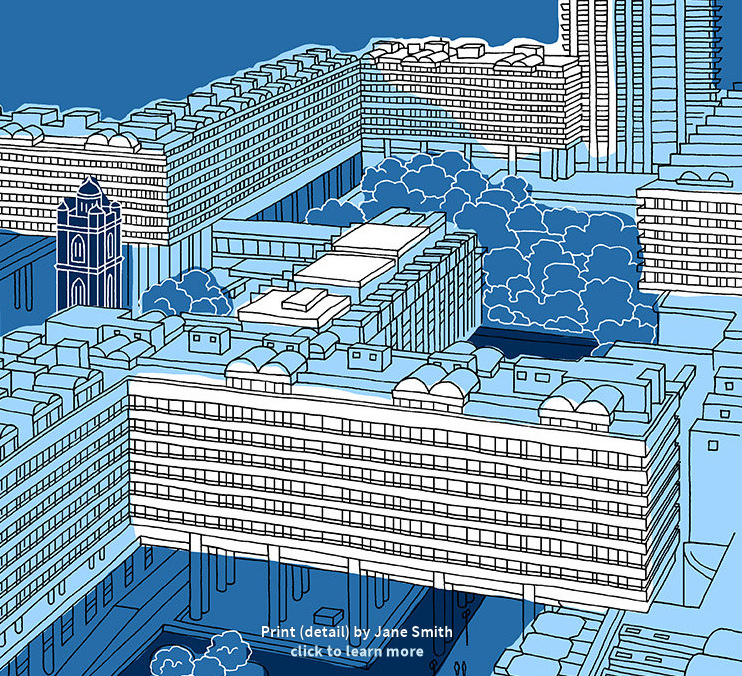 In the 19th century the Barbican was a warren of factories, ware­houses, markets and shops. Much of it was razed by fire in 1902 and the remainder was devas­tated in the Blitz.

In 1956 housing minister Duncan Sandys recom­mended the creation of a model post-war neigh­bour­hood with schools, shops and amenities as well as homes. The archi­tects Cham­berlin, Powell and Bon were appointed to design the complex, and created a focal lake, residents’ gardens and the tallest resi­den­tial blocks in Britain. With 43 storeys, the Barbi­can’s three towers were not eclipsed the construc­tion of Manchester’s Beetham Tower in 2006.

The restored medieval church of St Giles without Crip­ple­gate was retained as a centre­piece. The remainder of the estate consists of low-rise blocks of apart­ments, plus the Guildhall School of Music and Drama, the City of London School for Girls and a handful of shops and service providers.

The first of 2,000 flats were completed in the early 1960s and they were orig­i­nally available only to rent from the Corpo­ra­tion of London. The idea of living in the City – where every­thing closed at weekends – met with consid­er­able scep­ti­cism at first, but soon the waiting list for flats grew to several years. For nearly two decades the Barbican could lay claim to being Britain’s most upmarket council estate. However, the Housing Act of 1980 intro­duced the right of council tenants to purchase their homes. Many residents bought and sold as soon as possible at a consid­er­able profit and the estate progres­sively became the preserve of well-paid City bankers and the like.

The Barbican’s rain-stained, hammered concrete slabs detract from its aesthetic appeal but it has achieved grade II listed building status by virtue of its distinc­tive character.

The Barbican arts centre was built between 1971 and 1982 at a cost of £153 million, which sounds like a bargain now but was a lot at the time. Its buildings are on ten floors, the lowest being well below sea level. The centre claims to be Europe’s largest multi-arts and confer­ence venue and presents a diverse range of art, music, theatre, dance, film and creative learning events. It is also home to the London Symphony Orchestra.

The Museum of London has several paintings of the Barbican and its surroundings, notably Harold Hussey’s depiction of the scene before building began but after the clearance of the former bombsite, revealing the colossal scale of the project.