The City of London’s most populous ward, taking in the Golden Lane estate and eastern and central parts of the Barbican 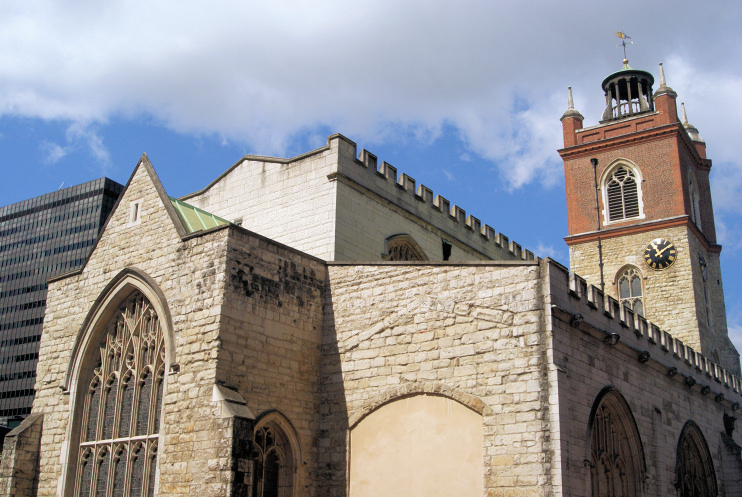 Crip­ple­gate was the northern entrance to Londini­um’s fort, erected around ad120. The gate was located at what is now the corner of Wood Street and St Alphage Gardens and its name probably derives from the Old English crypel-geat; a cripple was ‘one who can only creep’ – which was the necessary way to duck under the original low arch. An alter­na­tive possi­bility is that it was a corrup­tion of crepel, a burrow.

Shown in the photo above, the church of St Giles without Crip­ple­gate was built in 1090, probably on the site of a Saxon prede­cessor, and rebuilt in 1545 after a fire. There is evidence that William Shake­speare was a parish resident in the late 1590s. Oliver Cromwell was married in St Giles’ Church and the poet John Milton is buried here. The writer Daniel Defoe was born in Crip­ple­gate ward in 1660.

The Crip­ple­gate entrance was recon­structed at least twice and demol­ished in 1761. By this time, the formerly wealthy ward of Crip­ple­gate had gone downhill and religious dissi­dents and jour­nal­ists had come to live here.

The most renowned thor­ough­fare was Grub Street, which had a community of hack writers and became a byword for ‘persons who wrote for hire’ and hence for literary efforts of low value. In a leap from the ridicu­lous to the sublime, Grub Street was renamed Milton Street in 1829. The street was subse­quently denuded of dwellings following an influx of busi­nesses to the area and an exodus of residents, a process that was bolstered by the extension of the under­ground railway line from Farringdon to Moorgate in 1865.

Crip­ple­gate was damaged beyond recog­ni­tion by Second World War bombing and the church needed compre­hen­sive restora­tion. Most of the area was rebuilt with the massive concrete blocks of the Barbican, where the first homes were completed in the early 1960s. The remainder of the ward has been filled with office towers. The ward’s resi­den­tial popu­la­tion exhibits a high degree of affluence, although the level of car ownership is very low.

Giles Emerson’s book Sin City (2002) includes a description of the activities of the Farting Club of Cripplegate in the early 18th century.

Postal district: EC2
Population: 2,782 (2011 census, a 7.5 per cent decline on 2001)
Further reading: Caroline Gordon and Wilfrid Dewhirst, The Ward of Cripplegate in the City of London, Cripplegate Ward Club, 1985
Website: Cripplegate Ward Club (an institution that has no connection with the 18th-century club mentioned above)

* The view of St Giles Cripplegate church from the Barbican at the top of this page is modified from an original photograph, copyright Robert Lamb, at Geograph Britain and Ireland and made available under the Attribution-ShareAlike 2.0 Generic Licence. Any subsequent reuse is freely permitted under the terms of that licence.

as lame as St Giles’ Cripplegate
The expres­sion combines a pun on the name Crip­ple­gate with a reference to the Athenian saint to whom its parish church was dedicated; St Giles is the patron saint of the lame.

“This proverb … in common discourse, is spoken rather merrily than mourn­fully, of such who, for some slight hurt, lag behind; and sometimes is applied to those who, out of laziness, coun­ter­feit infirmity.”

The term was also sometimes used of a lame excuse.

Crip­ple­gate ‘vampire’
A tall tale derived from a memorial in St Giles’ church to Constance Whitney (1611–28), said to feature a repre­sen­ta­tion of a lady in a shroud rising from her coffin. This has been inter­preted to refer to an uniden­ti­fied young woman who was buried while in a trance and released from her entomb­ment by an unscrupu­lous sexton who opened the coffin to steal a valuable ring from her finger. She rose up, the sexton fled in terror and she went on to live a long life and bear several children. The legend was further embell­ished to suggest that the woman in question was Constance herself. The story has gained new currency in modern times, having been repeated in several semi-scholarly works by ‘vampirol­o­gists’, including Bob Curran’s Ency­clo­pedia of the Undead (2006).