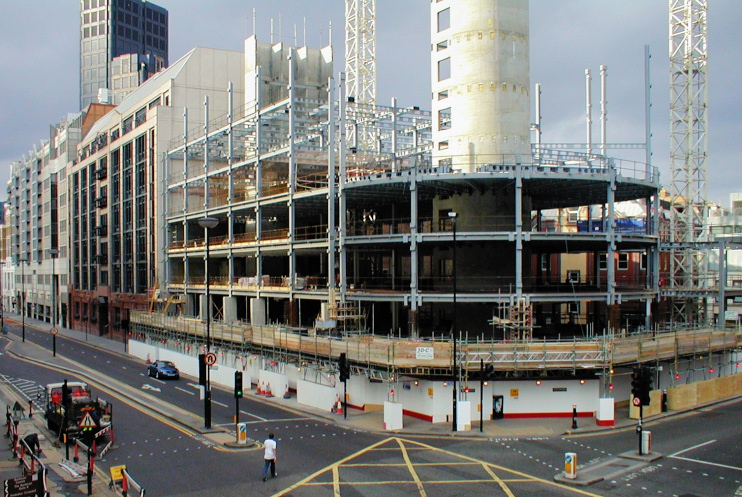 An aperture in the Roman defences that surrounded the City was added here sometime after the construc­tion of the wall itself, perhaps in the early fourth century. The Alder­s­gate name, relating to a man called Ealdrēd, probably dates from the late Saxon period. When James VI and I came from Scotland to London in 1603, he entered the city by this gate and statues of him were erected here, seated on horseback outside the gate and on his throne on the inner side.

By the 1650s the wide road was lined with impres­sive houses and was described by a contem­po­rary writer as “resem­bling an Italian street more than any other in London.”

Alder­s­gate Street holds a special signif­i­cance for Methodists, for it was at a religious meeting here on 24 May 1738 that John Wesley felt his heart “strangely warmed” as he listened to a reading of Martin Luther’s preface to the Epistle to the Romans.

Alder­s­gate was demol­ished in 1761; the Barbican’s Thomas More House stands near its site. Alder­s­gate Street now consti­tutes the very south­ern­most end of the A1 and extends just south of the rotunda to meet St Martin’s le Grand.

There has been a public house on the site of the Lord Raglan, at 61 Alder­s­gate Street, since Shakespeare’s day – indeed, the Bard is said to have been among its regulars. It was rebuilt in the mid-19th century, and renamed then after the Crimean War commander.

Across the road from the Lord Raglan (at the bottom of the map below), Postman’s Park has a handsome and poignant display of commem­o­ra­tive tiles dedicated to ordinary people who hero­ically gave their lives in order to save others. Two of the memorials are shown in the composite image below.

North of the rotunda, the jutting edges of the Barbican resi­den­tial complex filled most of the east side of Alder­s­gate Street in the early 1960s. Commer­cial offices (and one apartment block) formed an unbroken wall of stone and glass south of the junction with Long Lane at the beginning of the 21st century. The photo at the top of this article shows one of the construc­tion projects in progress. A fire station had previ­ously occupied the corner site.

The Museum of London adjoins the Barbican complex, though it plans to move to nearby Smith­field. Its exhibits include the Great Fire Expe­ri­ence, recon­structed Victorian shops, the gilded Lord Mayor’s coach, a Roman horse skeleton, and grim 18th-century prison cells, complete with prisoner graffiti. Outside the entrance to the museum a bronze memorial in the shape of a flame marks the site of Wesley’s conversion.

In 1667, John Milton wrote much of Paradise Lost in a house near Aldersgate.