An industrial island formed by the dividing and recombining tributaries and channels of the River Lea, situated in Mill Meads between Bromley-by-Bow and West Ham 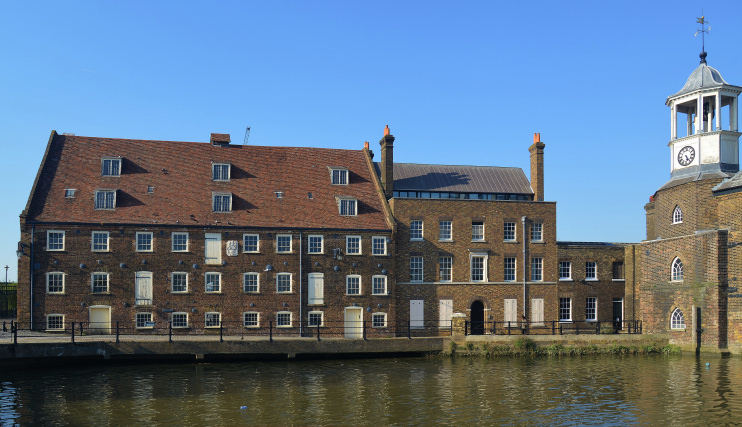 This has been a trading site for over 900 years, although little is known about the tidal mills that operated here in the Middle Ages. Three Mills’ name was in use from the 16th century but none of the struc­tures survives from that period and only two mills have stood here for much of the time since then. Ian Nairn wrote of the two remaining mills that they “form a focus like a village green and tie a knot in the Lea valley.”

Seen on the left in the photo­graph above, the House Mill, which dates from 1776, is the largest surviving tide-powered mill in Britain – and probably in the world. Its milled grain was once a source of much of London’s flour – and gin. Second World War bombing brought its active life to an end but it has now been partially restored as a showpiece, though its opening hours are presently very restricted. Partially visible on the right of the photo, the more picturesque Clock Mill was rebuilt in 1817 from an earlier mill.

Other buildings on the island were destroyed by fires and bombs in the first half of the 20th century. The River Lea Tidal Mill Trust has been working to improve public access to and usage of the House Mill but funds are limited so only ‘on demand’ guided tours are presently offered, as unescorted visits can’t be safely permitted.

A signif­i­cant part of Three Mills is now occupied by film and tele­vi­sion studios. Alongside the studios, Copthorn Homes have converted the gin distillery’s former store­house into an apartment block.

Three Mills Green dominates the northern half of the island, together with a chil­dren’s playspace called Wild Kingdom.

Productions at 3 Mills Studios have included the television programmes Footballers’ Wives and Million Pound Drop, and the feature films 28 Days Later, Lock, Stock and Two Smoking Barrels and Sherlock Holmes: A Game of Shadows. This was also the site of the Big Brother house, used for the first two series of the (then) Channel 4 reality show before its relocation to Elstree in Hertfordshire.

The photograph of the House Mill and Clock Mill at the top of this page was taken by Barry Marsh, posted at Flickr, and generously released into the public domain.