A historic East End district situated between Bow and Poplar 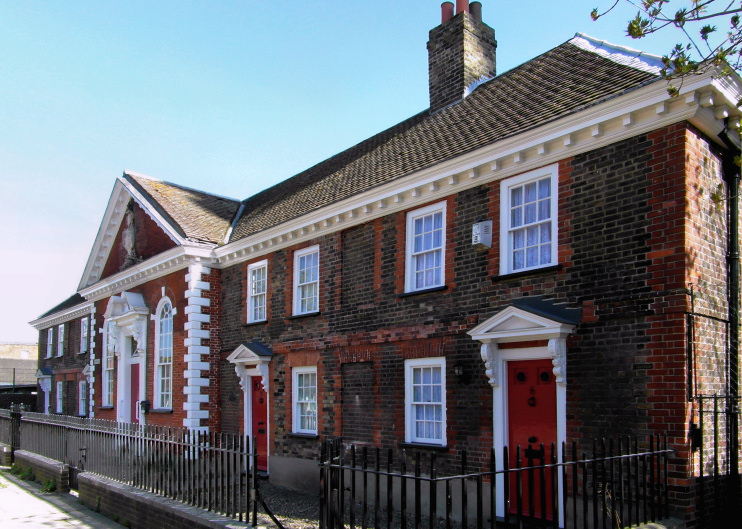 ‘Bromley’ is a corrup­tion of Old English words meaning ‘woodland clearing with brambles’, and the extended name avoids confusion with its south London namesake. It was earlier known as Bromley St Leonard, after the Bene­dic­tine priory of St Leonard, once the oldest religious house in east London.

After the disso­lu­tion of the monas­teries the manor was granted to Sir Ralph Sadleir, principal secretary of state to Henry VIII. The British Museum holds his account of the estate’s prop­er­ties, drawn up in 1540. By this time, Bow had gained ascen­dancy over Bromley but the latter became a popular place to build rural retreats from the early 17th century.

A range of four tenements with a centre chapel, the Drapers’ Almshouses were built in 1706. The grade II listed group is shown in the photo above.*

A hunting lodge that stood on what is now St Leonard’s Street was said to have been built by James I. Later known as the Old Palace, the building was split into two resi­dences in 1750.

From the 1820s, Bromley began to fill with noxious indus­tries and workers’ housing, some built by charities, some by prof­i­teering jerry builders.

Eight gash­olders were constructed in 1872. One was destroyed by a bomb in the Second World War and the surviving seven have stood unused for many years. Christo­pher Costelloe, Director of the Victorian Society, says: “The group value of so many Victorian gash­olders packed together is unmatched anywhere else in the world, making the Bromley-by-Bow gash­olders a true symbol for the Indus­trial Revo­lu­tion.” The Victorian Society included the group on its 2018 Top 10 Endan­gered Buildings list.

Much of Bromley was a slum by the late 19th century and it became an early target for civic improvement.

Bromley public hall was built on Bow Road in 1880 as the vestry hall for St Leonard’s parish. It now serves as Tower Hamlets’ register office.

The replace­ment of the Old Palace by a school in 1894 caused an outcry and played a pivotal role in promoting future (often unsuc­cessful) attempts to preserve east London’s heritage. The interior of the state room was salvaged and can be seen at the Victoria and Albert Museum.

Muriel and Doris Lester estab­lished the original Kingsley Hall in 1915, as part of their work among the poor of Bow. Shown in the small photo below,* the present hall was built on Powis Road in 1927–8.

As well as meeting the needs of local people, Kingsley Hall also gave space to a variety of groups and movements, including the suffragettes and the Jarrow marchers. A blue plaque records Mahatma Gandhi’s stay here. Later it was a base for the psycho­an­a­lyst RD Laing.

From the 1930s the London County Council began a massive slum clearance programme, erasing the old village green and its houses and inns.

The parish church of St Mary with St Leonard was among the buildings destroyed. Its church­yard is now a wilder­ness garden and adventure play­ground, entered via the How memorial gateway.

After a period of dere­lic­tion in the 1970s a local campaign revived Kingsley Hall, with the backing of Richard Atten­bor­ough, who used it as a set for his film Gandhi. The building was reopened as a community centre in 1985 and the Gandhi Foun­da­tion is also based here.

Fifty-six per cent of homes in the Bromley-by-Bow ward were rented from the council or a housing asso­ci­a­tion at the 2011 census – sharply down from 72 per cent at the previous census but still a very high figure. A further 24 per cent of homes were privately rented.

The largest ethnic minority (45 per cent) is of Bangladeshi descent, followed by white Britons. The Bromley-by-Bow Centre on Bruce Road is a community regen­er­a­tion organ­i­sa­tion that aims to harness the energies and abilities of local people through a variety of inte­grated projects, linking health with education and enter­prise, for example, or envi­ron­ment with training and family support.

The political economist David Ricardo, the son of a Dutch Jewish stockbroker, grew up in Bromley St Leonard in the late 18th century.

* The picture of the Drapers Almshouses at the top of this page is adapted from an original photograph, copyright Reading Tom, at Flickr, made available under the Attribution 2.0 Generic Licence. The picture of Kingsley Hall is adapted from an original photograph, copyright Gordon Joly, at Wikimedia Commons, made available under the Attribution-ShareAlike 2.5 Generic licence. Any subsequent reuse is freely permitted under the terms of those licences.